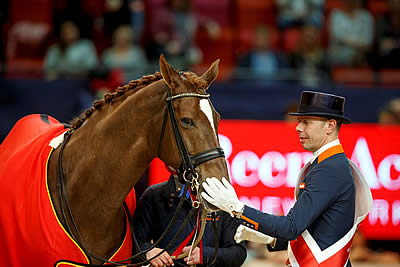 The 42-year-old, team gold and individual bronze medallist at last year’s FEI European Championships in Aachen (GER), gave it his all to earn a mark of 82.357 in front of a packed crowd in the Scandinavium Arena.

“It was really special for me,” Minderhoud said afterwards. “This was my sixth final and I’ve never been on the podium, although I was twice really close. I started off as a groom and it was always my dream to win it so it’s very emotional. The horse is almost like a dog; you can take him everywhere. He’s very sweet and always tries for you; he’s a really good boy!”

The win came at the expense of home crowd favourite Tinne Vilhelmson-Silfven, who finished just 0.928 per cent adrift with Don Auriello. Germany’s Jessica von Bredow-Werndl and the stallion Unee B, third-place finishers in Las Vegas (USA) 12 months ago, once again stood on the third step on the podium.

Minderhoud’s victory was the 13th Dutch win in the FEI World Cup™ Dressage Finals, with Hans Peter’s partner Edward Gal winning the title six years ago on home ground in ‘s-Hertogenbosch. “It’s good we have one each now!” Minderhoud joked.