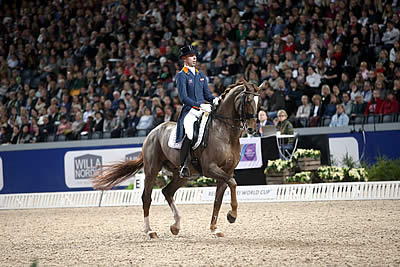 Stockholm (SWE), 29 November 2015 – The Netherlands’ Hans Peter Minderhoud reigned supreme in the Reem Acra FEI World Cup™ Dressage 2015/2016 Western European League qualifier at Stockholm in Sweden today. The 42-year-old rider who, with Glock’s Johnson, claimed team gold and individual bronze at this summer’s FEI European Championships in Aachen (GER), steered another of his powerful string, the 14-year-old Glock’s Flirt, to victory ahead of host nation stars Patrik Kittel and Watermill Scandic. And it was a great day for the Dutch when Adelinde Cornelissen lined up third with the Jerich Parzival who won back-to-back Reem Acra titles in 2011 and 2012.

There was a strong Swedish presence, with seven of the 15 starters representing the host nation. And last year’s Swedish winner, Tinne Vilhelmson Silfven, lined out with Paridon Magi this time around to finish fifth just behind Denmark’s Agnete Kirk Thinggaard and Jojo Az.

It was Kirk Thinggaard who led the way into the closing stages after posting 76.675 with the dark bay 12-year-old horse which has bounced her up to the top level of the sport over the last two seasons. But then Cornelissen and Parzival raised the game with a performance that earned 78.775 to go out in front.

The 36-year-old Dutch rider said afterwards that she had “mixed feelings” about her result. “I’m happy that Parzival was here and going well. He was great in the warm-up but he felt a bit tired in the arena. We have not been competing for a long time, so we need to find a suitable routine again for both of us,” said the rider whose career highlights with this wonderful chestnut go all the way back to team and individual gold at the FEI European Championships in Windsor, Great Britain in 2009 and include team gold at the Alltech FEI World Equestrian Games™ in Kentucky, USA the following year and individual silver and team bronze at the London 2012 Olympic Games.

Cornelissen’s compatriot, Minderhoud, was next into the ring and from the outset looked set to change the leaderboard rankings once more. Glock’s Flirt was completely in the zone, concentrated and responsive, and as Minderhoud said afterwards, “He had no real weak points in his test today, from the beginning to the end he was completely with me, nicely supple and super on the aids.” He just had one little bobble. “I had a great feeling; he was really trying for me but I had a small mistake in the one-tempis. I re-did them really well though, and the rest of the test was really good,” he said.

The win was not completely assured, however, as there were still two more contenders left to run, and the first of these was Kittel who can never be discounted. The 39-year-old rider’s record with 16-year-old stallion Watermill Scandic includes individual bronze at the FEI European Championships in Rotterdam (NED) in 2011 and, four years later, the Dutch-bred horse continues to drum out the incredibly rhythmic passage and piaffe that is his trademark.

“I was really happy, although he was a bit hot in the canter!” Kittel said afterwards. “The beginning of the test was really good, then I had a rider mistake in the canter zig-zag, but at 16 years old he feels better than he did when he was 10, which is great! And he will still be in the game next year too, and in the Final in Gothenburg if we qualify,” the Swedish rider pointed out. His mark of 79.100 slotted him in behind Minderhoud and ahead of Cornelissen, and that was where he would stay when, last to go, Kittel’s wife, Australian athlete Lyndal Oatley, steered Sandro Boy into sixth place on a score of 75.425.

Eager to do well

Talking about his win this evening, Minderhoud admitted that he was “very eager to do well. Last year here in Stockholm I won the Grand Prix, but I had to settle for second place in the Freestyle,” he pointed out. However, he felt victory was well within reach this time around. “I knew it was possible because we won yesterday; however, yesterday the scores were very close so I couldn’t be sure, especially with Adelinde and Parzival and Patrik with Scandic in such good form.” He said he had been encouraged by the sight of the winner’s prize. “When I saw the orange car in the corner of the arena I thought, ‘Hey, a Dutch person should win that!’ and this is the first car I’ve ever won!” the delighted Dutchman said.

He has now moved up to the top of the Reem Acra FEI World Cup™ Dressage 2015/2016 Western European League leaderboard with 54 points to date, and plans to continue campaigning throughout the remainder of the series. “I will go to Salzburg with Romanov and probably bring Flirt to London and Johnson to Amsterdam and den Bosch,” he said this evening.

And reflecting on a very successful afternoon, he concluded, “This is my first qualifier win with Flirt, having competed him for one and half years. He is very easy to travel with, so I can take him everywhere. Flirt is getting closer all the time; who is my best horse is really depending on the form of the day. It’s really a luxury having three top horses,” he added.

The fifth leg will take place in Salzburg, Austria next Sunday, 6 December 2015. For details of the Austrian fixture, go to http://amadeushorseindoors.at/ or contact Press Officer Ruth Büchlmann, rb@uppercut.at +43 676 844180222.

This was the second edition of the Swedish International Horse Show at the Friends Arena in Stockholm.

The Netherlands’ Hans Peter Minderhoud and Glock’s Flirt won the competition with a score of 80.950 ahead of Sweden’s Patrik Kittel and Watermill Scandic HBC on a mark of 79.100.

20 riders from 10 nations lined out in yesterday’s first competition, the Grand Prix which was also won by Minderhoud and Glock’s Flirt.

The popular Swedish fixture attracted a record crowd of 89,318 spectators this year.

There was a total audience of 6,005 for the Dressage Grand Prix and 6,786 spectators watched today’s Reem Acra FEI World Cup™ Dressage Freestyle.

Ground Jury President Gustav Svalling SWE: “Parzival looked very nice for a tired horse! It meant a lot to have him here again. The class was a pleasure to judge with many good performances. Flirt has developed a lot since I last judged him. Tinne did a super job also.”

Hans Peter Minderhoud NED (1st), talking about moving his competition yard earlier this year: “We moved in May; it’s only 20 minutes from where we were before, near Arnhem. In our first place we were renting but now Glock’s have built this beautiful stables and to be honest it’s just like a dream come true for us!”

Hans Peter Minderhoud NED (1st), when asked what he looks for in a horse: “In a new horse I look for a nice build, three good paces, or at least good walk & canter.”