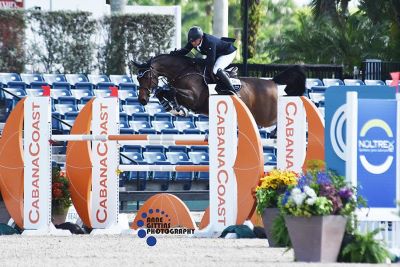 “It feels fantastic! I am so happy, I can’t describe it,” remarked Michan after his second FEI victory for the week, having already won the $6,000 Palm Beach Equine Clinic 1.45m CSI3* aboard Loribri on Thursday. “It’s cool to have a horse that is so talented and such a trier like Cosa Nostra. I am very grateful to my team for all the work they do for us to be in good shape and be able to perform well.”

Jorge’s 16-effort pattern for the first round separated the top performers from the rest of the pack as 10 pairs advanced to the jump-off. The list of eligible athletes included Kristen Vanderveen (USA), Margie Goldstein-Engle (USA), Leslie Howard (USA), Kraut, Spencer Smith (USA), Michan, Moggre, Hector Florentino (DOM), Gonzalo Guevara (COL), and Brittni Raflowitz (USA). Five additional challengers managed to keep all the rails in their cups, but fell victim to a single time-fault to keep them out of contention.

On the first-round track, Michan commented, “It was very technical, especially that line that came from fences three, four, five, and six. It was very hard to ride, and the horses had to be very concentrated and very careful. For me, that was the toughest. The time was also a big factor. There were a few spaces where you could gain a little time, and I think you had to keep that in mind and gallop your horse through those turns to be inside the time.”

Third to go in the jump-off, Howard and Donna Especiale snagged the early lead over the short course as the first double-clear team, but were soon eclipsed by Kraut and Confu, who shaved almost a second off the clock to break the beam with no faults in 35.569 seconds. Midway through the pack, Michan and Cosa Nostra (Conthargos x Quintender), a 2010 Oldenburg mare, sliced milliseconds off of the frontrunners’ time to jump to the lead, sitting on a quick, fault-free time of 35.145 seconds. Four more duos chased them down, but ultimately none could catch the quick combination. Kraut and Confu maintained the reserve spot with their time, and Moggre captured third place on MTM Vivre Le Reve in a time of 35.767 seconds.

“I saw Laura and she was very quick, like always,” noted Michan. “I tried from fence one to grab a very good pace, and I think I sustained that pace through the course. I saw my turns and distances from the first distance up, so that helped me to not lose a lot of time. Our turns were nice and tight. We were up by a very, very little margin, but we were ahead of them.”