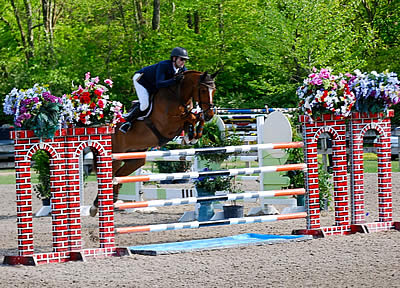 Qasqai, a 12-year-old Belgian gelding, only came to Tokaruk in early March. After getting to know each other showing in the 1m30 and 1m40 classes in Gulfport, MS, the team scored this Grand Prix contest, their first together as a pair.

Earlier in the week Tokaruk and Qasqai earned blue-ribbon honors the 1m30 Jumpers and — despite clocking the fastest time — were seventh in Thursday’s Welcome Stake with only one rail down.

In the Grand Prix Tokaruk bested 15 other teams for the win, including Christoph Schroeder and the Schroeder-Derek Peterson-owned Catungee, who took the second spot, and Louise Graves and Zavira, who were victorious in the Spring I Grand Prix just one week earlier.

In round one Tokaruk and Qasqai were first in the order of go and set the bar high with a clean round in the Gerry Briggs-designed course with a time of 89.655 out of an allowed of 95 seconds.

Only five earned a place in the jump off. But Tokaruk and Qasqai were again first on course and showed the crowd they were aiming for the victory gallop with a second flawless round in a searing 39.023.

“My plan was to ride a very efficient jump off, but going first I really wanted to leave the jumps up,” said Tokaruk. “Qasqai is fast and he’s careful. He loves to turn and burn and wants to win every class he’s in, so he’s really a lot of fun to ride.

“This horse is a natural champion – he has shown all over the world – and I’m so thrilled to have him in my barn and so grateful for such supportive owners,” Tokaruk added. “When she’s ready, Maria will take over the ride and I’m just so excited to see what they will do together.”

The Prix capped off a banner week at Brownland for trainer Tokaruk and owner Roberts. In addition to the Grand Prix victory and second place in the Welcome class, Tokaruk was Champion in the 1m15 jumpers aboard the Wolf-Trot Farms-owned Zento VDV (a current sale horse). Roberts, meanwhile, was Reserve Champion in the medium/large green pony hunters aboard her own Rollingwoods Piece of Cake.

Tokaruk Show Stables, LLC is a full-service equestrian facility based in Collierville, TN. Canadian-born Michael Tokaruk is an internationally renowned champion who has ridden and trained hunters, equitation horses, and grand prix jumpers and their riders to countless accolades at the biggest horse shows across North America.