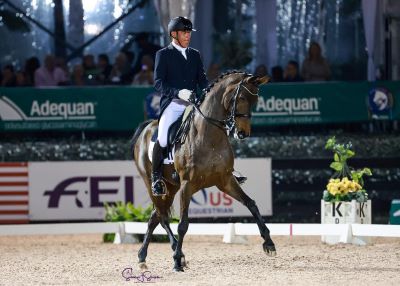 At 10 years old, Klimke’s ride Domino 957 was the youngest horse in the class and competing at her first CDI at big tour level. She contested small tour classes at AGDF in 2021, but this marked her first international win. The pair was awarded a high score of 75.875%.

“Yesterday in the grand prix she wasn’t too hot in the piaffe, which is normally her highlight,” said Klimke. “I’ve been long enough in the sport of the training of young horses up to grand prix that I don’t get completely crazy tonight because my horse won the freestyle. I’m super happy about the whole circuit, and thankful to the organizers, to everybody, that makes it happen.”

Spanish rider Paula Matute Guimón pulled off the biggest win of her career, piloting her own and Julie McAllister’s 14-year-old Delagronge to the blue ribbon in the Grand Prix Freestyle CDI4*, presented by U.S. P.R.E. Association. The second “Friday Night Stars” evening freestyle at AGDF also provided a personal best for Matute Guimón and the De Niro stallion of 74.480%.

It was an international podium, with Germany’s Christoph Koschel finishing runner-up on the striking grey Lusitano Favorito 11 (71.670%) and Mikala Münter (USA) filling third on Salsa Hit with 71.425%.

“I honestly didn’t expect those results,” said the 26-year-old Matute Guimón. “The victory is amazing, but I want to keep improving. Winning is a very nice reward, and it means a lot. Of course, we all like the color blue, but I wasn’t expecting it. I have great competitors next to me, who work very hard. I’m super happy, and I’m going to remember this week forever.”

“This freestyle [music] used to belong to my brother with Don Diego and I took over, and I think now I can say that it’s mine,” she added. “The horse was a little bit challenging today, but we still made it happen.

“This win means a lot to me,” continued Matute Guimón. “It’s been many years watching from the outside trying to figure out what it takes to come back, so I really am enjoying every second of this. I’m so happy, so grateful to the team behind me, the owners for believing in me, for believing in us, and for making this dream come true.”

Judge Janet Foy said: “Paula and I spoke last month at a CDI, and she had a little issue with some of her choreography. I was thrilled that tonight she came back after a big disappointment there and fixed it, rode beautifully, and did a great job.

“The quality of the horses keeps getting more and more amazing at this circuit,” she continued. “I’m really looking forward to judging the five-star and seeing how these horses are progressing through the season. There are world-class horses, and we have world-class riders here as well. To have the Friday nights again is very, very special.”

Runner-up Christoph Koschel found his horse, Favorito 11, during a clinic in Portugal.

“I train a few team riders from Portugal, and I found him there,” explained Koschel, who rode to music from “Peter and the Wolf.” “The guys said his head is a little too big, so they didn’t want to have him. I said I’d always wanted a Lusitano. It was just for fun, and I wanted to see where I can get to, and so I bought him when he was five, and now we’re in the international ring.

“He was a little scared under the lights in the canter tonight,” added Koschel, who explained that the horse was due to make his CDI debut last year, but it was delayed due to white line disease in his hoof which took a year to clear up. “It’s really his first time away from home, but I was really happy with my ride.”

Mikala Münter was delighted to be back on a grand prix podium.

“It’s just amazing to be back; it’s been many years,” said Münter, referring to the stellar career of her former top ride, My Lady. “I got Salsa Hit in training, and nobody ever thought he was going to make it to this level. He was very spicy. A lot of people have seen me fly around the show grounds with this horse over the years, so I’m thrilled that he can keep it all together and he’s made it to this level. And I’m sure he’s going to get even better once I get everything cleaned up.”