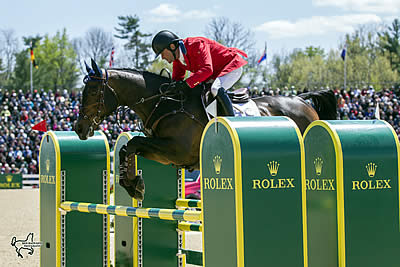 Lexington, Ky. – The Rolex Kentucky Three-Day Event presented by Land Rover came to a conclusion this afternoon as 41 combinations went head-to-head over Richard Jeffery’s show jumping course inside Rolex Stadium at the Kentucky Horse Park. Michael Jung of Germany rode the impressive mare, fischerRocana FST, in yet another foot perfect jumping effort to win the title of Rolex Kentucky Champion on their dressage score of 39.3.

Jung said of fischerRocana FST, “She is very correct. She knows what she has to do in each phase. Every competition is easy with her and that is very special.”

Overnight leader Tim Price of New Zealand and Wesko had an extremely costly rail down to finish a close second on 40.3. Jung also took third place honors with La Biosthetique-Sam FBW who had two uncharacteristic rails down on course to finish on 44.7.

Earning the Rolex/USEF CCI4* Eventing National Championship title was highest placed American Phillip Dutton with Fernhill Cubalawn, owned by Thomas Tierney and Simon Roosevelt. The pair went clear and inside the time to take fifth place on 54.1. Going earlier in the order, Dutton rode a flawless round on Fernhill Fugitive, owned by Thomas Tierney and Ann Jones, to finish ninth on 59.3. Dutton was the only rider in the field not only to saddle two mounts on Sunday, but to ride both to double clear finishes on a day when clear efforts were scarce. Making this achievement more special is the fact that both horses were contesting their first CCI4*.

“I am excited about their futures,” said Dutton. “They are both still young, but really stepped up and improved this weekend.”

This marks the fourth time Dutton has been named the Rolex/USEF CCI4* Eventing National Champion having won the title in 2010, 2008, and 2007.

Will Coleman and OBOS O’Reilly, owned by the Four Star Eventing Group and Coleman, added four faults to their dressage score with a rail down at fence five to finish sixth on 56.6. Boyd Martin and Master Frisky, owned by Stephen Blauner, also ended the day on 56.6, but placed seventh behind Coleman as the classification is decided in favor of the athlete whose cross-country time was closest to the optimum time. Coleman finished his double-clear cross-country ride just one second under the optimum time. He was presented with two-year free lease on a 2015 Land Rover Discovery Sport having won the Land Rover Best Ride of the Day Award.

The complete competition is available on-demand on the USEF Network, in addition to complete results, post-ride interviews, and daily recaps from today and throughout the week.