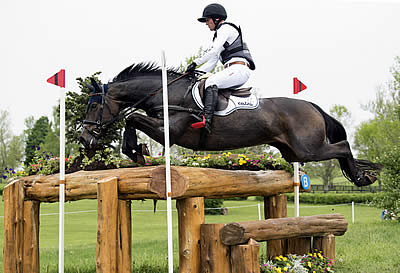 Even dual Olympic champion Michael Jung admitted cross country day at the Rolex Kentucky Three-Day Event, third leg of the FEI Classics™, was a tough one with Derek di Grazia’s track posing a serious challenge. However, the German maestro is yet again in pole position on FischerRocana FST, despite finishing four seconds (1.6 time penalties) over the optimum time of 11 minutes 17 seconds and surviving a precarious moment when the brave little mare made an enormous leap into the lake.

Jung, currently third in the FEI Classics™ having led the series last year, has a fence in hand to win a record third successive Kentucky on the same horse. His nearest challenger is Frenchman Maxime Livio, current leader of the FEI Classics™ after his win in Pau, who rode a masterful round to finish exactly on the optimum time on Qalao Des Mers to rise from eighth place after dressage to second.

“Today was not our best ride, but we have a true partnership and kept fighting,” said Jung. “FischerRocana looks very well after the finish – she is a tough girl!”

The leaderboard has changed dramatically and a brilliant, committed ride by the sole British representative, Zara Tindall on High Kingdom, has propelled her from 16th to third place. A determined Matthew Brown, previously 19th after dressage, has leapt to fourth place on Super Socks BCF and is the highest placed American rider.

Demonstrating the openness of the competition, Erin Sylvester (USA), who was only 51st after dressage, is now 13th on Mettraise after finishing bang on the optimum time.

There were 26 clear rounds from the 42 finishers and six within the optimum time. Dressage leaders Clark Montgomery (USA) and Loughan Glen lost their chance of retaining their position with a disappointing refusal at a skinny brush at fence 18a.

Three other riders in contention after dressage also disappeared off the leaderboard: both Kim Severson (USA), third on Cooley Cross Border, and Jessica Phoenix (CAN), fifth on Bentley’s Best, retired after run-outs at corners and Elizabeth Halliday-Sharp (USA), fourth, parted company from Fernhill By Night at the Normandy Bank.

The jumping finale, which starts at 1pm local time, is sure to be a tense affair as the magnificent Michael Jung bids to make history – again.