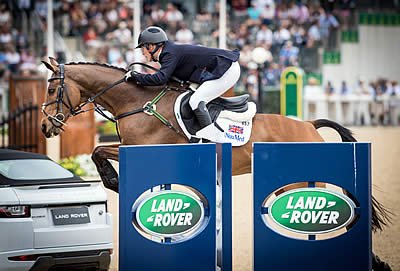 Following Saturday’s tough cross-country ride, 39 horses headed into the final phase of the competition. The show jumping course set by Richard Jefferys, which featured a 2017 Range Rover Evoque Convertible and a 2017 Range Rover Sport, proved tricky for the field with only four competitors finishing clear within the time. Third-to-go, Zara Tindall, produced a stunning clear round aboard her 16-year-old bay High Kingdom; the echoes of cheers from the 25,000 spectators confirmed this and put the pressure on the final two competitors. Maxime Livio, who beat Michael Jung in Pau, France last year, kept his cool to ride the fourth and final clear round of the day with his partner, Qalao Des Mers. The stadium fell silent as the formidable pairing of Germany’s Michael Jung and fischerRocana FST began their round, with a fence in hand, hoping to make history once again. Despite incurring four faults, the crowd erupted as Jung pumped his fist in the air celebrating a special moment in his career to claim the coveted Rolex Kentucky Three-Day Event title for a historic third consecutive year.

Jung commented on his achievement: “fischerRocana FST is a top horse; the mare fights so hard for me and our partnership is so strong. She gave me a very good feeling in the warm up ring which made me feel good entering the arena. I did not have enough power in the triple combination so I was little nervous with two jumps to go! I am so grateful for my team and really pleased with the result.”

Land Rover Ambassador, Zara Tindall, spoke of her third-place finish. “I am so lucky to be here and I am very thankful to Land Rover and Rolex to have me back here; I wouldn’t be here without their support. My horse is fantastic; all through the competition he has been amazing; he owes me nothing and I have loved riding him this weekend. I have really enjoyed being here it as it is an amazing event to be a part of.”

Olympic bronze medallist, Phillip Dutton (USA), moved up the leader-board with his Irish Sport Horse gelding, Mr. Medicott, to not only take fourth place but also the USEF Championship Trophy awarded to the highest placed American rider, a prize presented to him for a record fifth year.

“It is particularly rewarding to finish as the top US rider,” said Dutton, who also celebrated his 40th Rolex Kentucky completion. “It has been a great event and it is the perfect way for Mr. Medicott to finish his four-star career.”

The optimum time of 11 minutes and 17 seconds proved difficult for the horse and rider combinations with only five out of 57 starters finishing within the time set by renowned course designer Derek di Grazia. Despite accurate clear rounds from fellow U.S. team mates, Holly Payne Caravella and Matthew Brown, Sylvester demonstrated true perfection, finishing spot-on the optimum time of 11 minutes and 17 seconds, to win the Land Rover Discovery Sport 24-month lease.