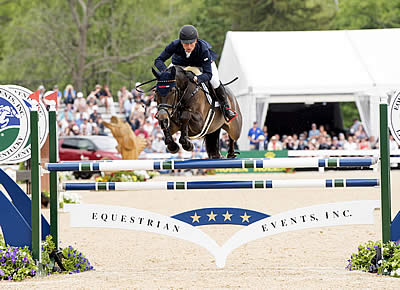 Jung retains Kentucky crown, with Livio (FRA) and Tindall (GBR) holding on to second and third

Germany’s Michael Jung smashed yet another record when winning the Kentucky Three-Day Event for the third year running on the 12-year-old FischerRocana, a mare that may not have the biggest movement but certainly has the biggest heart.

Jung did have a jumping fence down, but his supremacy in the dressage and cross-country meant he could afford it and is second in the FEI Classics™ after three out of six legs behind the superbly talented Frenchman Maxime Livio (FRA), who finished runner-up at Kentucky on Qalao Des Mers with a clear jumping round.

“She is a really wonderful horse, a top fighting girl. She jumped wonderfully and was only a bit spooky at the white fence. I really like Kentucky – and not just because I win here! – but because I feel very welcome. You can train the horse for every phase and it’s why I like it and why I come back.” — Michael Jung (GER)

With one FEI Classics™ win each, and a second place each, Livio and Jung both have their sights firmly on the 2016/17 series title. However, only Jung is competing at Badminton next weekend, fourth leg of the series, which could be his opportunity to step up to top the leaderboard.

Both Livio and Zara Tindall, the only British athlete in the field, finished on their dressage scores. Tindall was ecstatic with her third place after a beautiful clear round on High Kingdom and it must have laid the ghost of the disappointment two years when she had to withdraw before dressage when the horse suffered a freak injury.

Matthew Brown (USA) slipped from fourth to sixth after hitting the very first rail with BCF Super Socks, so it was the super-consistent Phillip Dutton (USA), who has now completed Kentucky an amazing 40 times, who captured yet another national title as highest placed USA rider, as he moved up to fourth with a clear round on the 18-year-old Mr Medicott, a horse having his last four-star run after an illustrious career. Hannah Sue Burnett (USA) was fifth on Under Suspection.

The Kentucky three-peat was Jung’s 10th four-star win – William Fox-Pitt holds the record with 14 – and the German Olympic champion, who is only 34, looks to be catching up with the Briton. Just hours after his triumph on American soil Jung was catching a flight to England en route to defending his title at Badminton next weekend.

A record number of spectators watched the 4* Eventing action this year at Kentucky, with 34’000 attending cross country and 24000 at the jumping finale.