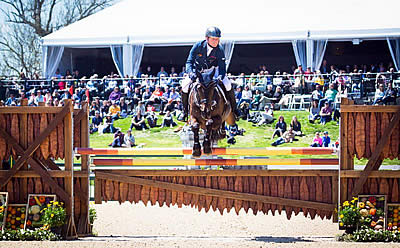 Lausanne (SUI), 27 April, 2015 – The phenomenal Michael Jung (GER) can now add victory at the Rolex Kentucky Three-Day Event (USA), third leg of the FEI Classics™ 2014/2015, to his ever growing list of major accolades. Riding the courageous little mare FisherRocana FST, he was the only rider to finish on his Dressage score.

The competition went right to the wire in front of a packed crowd enjoying some welcome sunshine in the Kentucky Horse Park. Although Jung hit two fences on La Biosthetique Sam FBW, his Cross Country runner-up, his earlier clear round on Rocana, third at that stage, left overnight leader Tim Price (NZL) on Wesko no leeway for error.

Wesko, a horse Price found in a Jumping yard, looked superb, but the Dutch-bred gelding just caught the upright at fence 10 and so Price had to settle for second place behind Jung and Rocana in a reversal of their placings at Luhmühlen (GER) last year.

Phillip Dutton (USA) had to withdraw Mighty Nice, seventh after Cross Country, but a clear on Fernhill Cubalawn elevated him four places to fifth. Dutton was also ninth on Fernhill Fugitive.

His former pupil Boyd Martin (USA) was seventh on Master Frisky, having dropped a place with eight faults, and Britain’s Nicola Wilson on the Irish-bred mare Annie Clover moved up three places to eighth with a penalty-free round.

The sole Australian in the field, Bill Levett, slipped five places to 10th on Improvise with an unfortunate 12 faults. There were nine clear rounds from the 40 finishers.

Jung received a great reception from the American audience who clearly realised they had seen a great horseman at work. “I have nice memories of Kentucky from 2010 [when he won the world title]. The people are very friendly and I’m happy that there are so many spectators. Thank you for everything!”

Michael Jung (GER), 32, was the first rider in history to hold Olympic, World and European titles simultaneously and the first to win four championship titles consecutively. He first came to prominence in 2009, when he won the Luhmühlen CCI4*, the FEI World Cup™ Eventing final in Strzegom (POL) and an individual European bronze medal in Fontainebleau (FRA), all on La Biosthetique Sam FBW. The pair went on to win the world title in Kentucky (USA) in 2010, double European gold in Luhmühlen in 2011 and double Olympic gold in London (GBR) in 2012 and, in 2013, they were second at Badminton CCI4*. Jung won a second European title, at Malmö (SWE) in 2013 on Halunke, and last year finished second at Luhmühlen and won world team gold and individual silver medals on FisherRocana FST, a 10-year-old mare by Ituango XX owned by Jung’s parents, Joachim and Bridgitte. He lives at Horb, Germany, where his family owns a riding establishment.