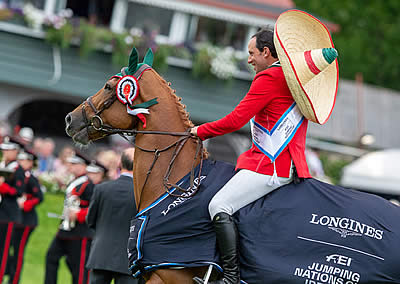 They arrived as complete underdogs to take on many of the best nations in the world, but Team Mexico turned the sport on its head when winning the Longines FEI Jumping Nations Cup™ of Ireland in Dublin (IRL). This last leg of the Europe Division 1 series was electrifying from beginning to end, and incredibly tense in the closing stages with the home crowd willing their own boys to win it.

But Eugenio Garza Perez (22) and his veteran team-mates Federico Fernandez (50), Patricio Pasquel (46) and Enrique Gonzalez (54) enjoyed the warmest reception, including a great big Mexican wave, from the 20,000 spectators when producing three second-round clears to pin Ireland, France, and Italy into joint-runner-up spot. Mexico had never won at the Irish fixture before and it was 37 years since they last contested the coveted Aga Khan trophy at the historic Royal Dublin Society showgrounds. So along with their delighted Chef d’Equipe Stany van Paesschen they didn’t hold back on the celebrations afterwards.

“I’ve been doing this sport a long time and I’ve never had a day like this!” said Gonzalez, whose last-to-go effort proved the clincher. “The Mexicans were really incredible; they came back in the second round with real determination and when you’re in contention in a Nations Cup that’s how you have to ride,” Irish Chef d’Equipe Rodrigo Pessoa added.

It seemed the reigning European Champions from Ireland would have it all their own way when they cruised into the lead on a zero score at the halfway stage, with Italy snapping at their heels on four faults followed by USA, Mexico and France carrying eight apiece. The Swiss, British, and Dutch were already down the line, eventually finishing sixth, seventh and eighth while USA slotted ahead of them in fifth despite being hampered by elimination for Jamie Barge (Luebbo) at the water in both rounds.

Mexican pathfinder Garza Perez (Victer Finn) showed a dramatic improvement from his 12-fault first-round effort when clear second time out, and when Pasquel (Babel) produced one of four double-clears of the day and Gonzalez (Chacna) wrapped it up by also being foot-perfect all the pressure was on the Italians and Irish. And both faltered, adding four faults to complete along with France on a total of 12 as Team Mexico made history and a whole lot of new Irish friends.

“It’s a dream come true. Since we got the invitation we have not stopped dreaming about this moment. We worked hard to be here and we enjoyed every second!” said Fernandez who posted two four-fault scores with Landpeter do Feroleto. This is a very unique horse-and-rider partnership; both are survivors. Federico was involved in a devastating air-crash that left many dead in 1987, and Peter, as the horse is known, also suffered serious injury in a lorry accident that nearly took his life. The pure joy of success was written all over every Mexican face, and Federico was in tears at the post-competition press conference.

“After what happened to me I feel an obligation to be happy, and today was one of the happiest days of my life!” he said. Garza Perez was happy too because he is trained by Irish showjumping legend Eddie Macken and was disappointed with his three mistakes in the first round.  But he put it all right when clear at his second attempt. “I was anxious not to let Eddie down and I hope today was as good for him as it was for me. It’s really out of a dream; it’s incredible!”

This result confirms Belgium as winners of the Europe Division 1 series with Ireland finishing a close second, just five points behind. Switzerland, France, Netherlands, Great Britain, and Sweden fill the next five places on the leaderboard and all seven countries will compete at the Longines FEI Jumping Nations Cup™ Final in Barcelona (ESP) in October. However, Germany and Italy have missed the cut and the Spanish who have finished last at the end of the 2018 season will be relegated to Europe Division 2 next year.