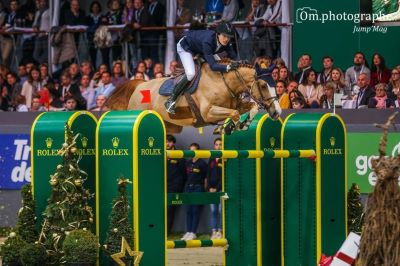 What are you goals for the rest of this year, and what are your plans, dreams, and ambitions for 2022?

This year, I was selected to jump in a few World Cups for the first time, which has been an amazing experience. I am competing in the World Cups in Madrid, London, and Mechelen, and having a good result in one would be a great way to end 2021. I am going to CHI Geneva, and as it is my home show, I want to perform really well there. I have been on an upward curve the second part of this year and my goal is to continue this and keep it going. I want to get higher in the rankings – hopefully in the top 50 – that would be a big achievement for me and enable me to jump in some bigger classes. I dream of competing in a Nations Cup. As a proud Swiss and patriot, to wear the red jacket is always something special for me and to have that chance next year would be great.

What has been the proudest moment of your career so far?

My proudest moment happened a few years ago when I was 16 years old; from the outside you may not think that this is the best moment in my career but for me it is. I was at an international U25 show in Chevenez, and as I was 16 my trainer wanted me to jump in the junior Grand Prix; however, I really wanted to jump in the U25 Grand Prix, as I had a wild card to jump in it, and it meant I could also win a wild card to jump at CHI Geneva. All week I was fighting to jump in the bigger class, and my trainer kept on saying it was a bad idea and I should not jump in it, but I fought so hard to jump in the class that eventually he let me enter into it – and I won it and got the wildcard to CHI Geneva! I was riding Cortino 46, and I think it was one of the proudest moments of my career because I felt like I had proved everyone wrong.

You were (are!) an accomplished junior skier; why did you decide to focus on show jumping?

I don’t really know why I chose one over the other, as I was really passionate about both sports. But I guess in the end I did have a preference for show jumping, and I have never once regretted choosing it over skiing.