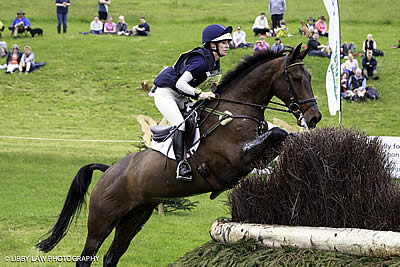 The USEF’s Eventing Emerging Athlete Program is an age-restricted program that identifies and cultivates talented young riders ages 18 and under and 25 and under with the potential to evolve into future United States team candidates. They’re coached by USEF Eventing Emerging Athlete Coach Leslie Law. This year, four of the program’s riders are among the entries for the Rolex Kentucky Three-Day Event presented by Land Rover.

Horse: P.S. Arianna. “She’s a joy to be around and has so much personality. She’s so loving in the barn. She loves treats, and if you scratch her, she’ll groom you back. She licks you after treats. She’s super-sweet, but as soon as we need to get serious, she puts on her game face and takes on anything in front of her.”

On Rolex: “I was a spectator when I was seven, and it’s always been a dream of mine. I’m definitely looking forward to cross-country. It will be challenging, but I can’t wait gallop up to Weldon’s Wall.”

On the Emerging Athlete Program: “It’s been really helpful not only to train with Leslie Law but to get to know the great riders that made the list. Being from Colorado, I hadn’t met the East Coast riders, so it’s great to spend training sessions with them.”

Horse: Fernhill Fortitude. “He’s an attention-seeker who wants to be the only one in the barn getting attention. Anybody could get on him and hack him around.”

On Rolex: “I’m just looking forward to being there and doing my first 4*. The cross-country’s going to be a lot more technical than I’ve seen and a lot bigger, too.”

On the Emerging Athlete Program: “All the extra lessons and camaraderie between the riders – it all sets you up for good performances.”

Horse: Captain Jack. “I know that if anything goes wrong, it’s my fault. He’s not going to let me down. He’s pretty much a pirate. He’s small and scrappy.”

On Rolex: “My focus will be on trying to get the cross-country. It’s crazy to look at the fences… they look massive. I’m hoping when I’m there on Captain Jack they won’t look as monstrous! But I’ve prepared myself.”

Horse: Spring Easy. “His nickname is ‘Child.’ He really is a kid, but he’s a good athlete and tries really hard. He definitely likes to joke around, but he’s a cool competitor.”

On Rolex: “Completion – that’s what I look forward to the most.”

On the Emerging Athlete Program: “If it wasn’t for the program, I wouldn’t be in the position I am today. It’s done more than just for my riding – it’s helped me on the business aspect, too. And to be able to build camaraderie with the other under-25 riders is great.”

The only place to catch all four days of the action-packed competition is the USEF Network live stream.