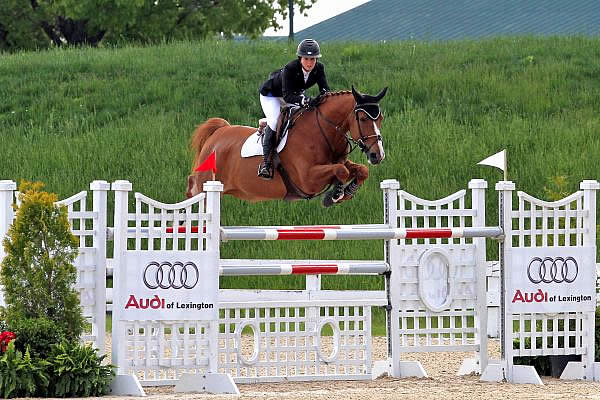 Lexington, KY – May 12, 2013 – It took precise riding and a talented mount to be at the top of the standings during today’s $75,000 Commonwealth Grand Prix at the Kentucky Spring Horse Shows. Richard Jeffery’s challenging track yielded only two clear rounds, but set the stage for a speedy jump-off between Meagan Nusz and Reed Kessler. Nusz had all the answers aboard Dynamo to capture the top honors. The duo clocked in just fractions ahead of Kessler, who was also double clear over the short course with Mika to place second.

The first round course for this week’s highlight event bested all but two of the 40 competitors that gathered at the Rolex Stadium. Two of the most challenging areas proved to be a vertical-oxer double combination bending line to an open water, that was followed by another oxer, as well as a triple bar-vertical-oxer triple combination to a steady vertical. Meagan Nusz was the second rider on course and the first to advance to the jump-off with Dynamo, owned by Amalaya Investments of Houston, TX.

“The course was just really technical,” stated Nusz. “The triple combination got a lot of people. I think that was more of mental game than anything else because you had to come in steady, when normally you want to ride at the triple bar, which was A, but you had to come in a little bit slow because the two was really short. Then you also had to ride out because the one stride was normal, but you had to ride the back rail. In your mind, you just had to stay calm and ride each fence individually.”

The only other clear effort came from Reed Kessler of Lexington, KY, riding her own gelding Mika. “I thought it was a great course,” she expressed. “It’s a $75,000 grand prix, so it should be difficult enough. It was the course designer’s job to set an appropriate course, and the fact that only two of us rode well enough to clear it is our fault, not his. I was a fan of today’s course; I did not think it was too hard.”

Both Kessler and Nusz managed to produce a second clear effort during the tiebreaker, separated by only fractions of a second. Nusz was the first to return to the ring and she pulled out all the stops with Dynamo. After finding the perfect distance to the first fence they tried to leave a stride out in the rollback to the next oxer, but when Dynamo backed off they chipped at the large fence. Dynamo still managed to clear the back rail, and Nusz sped to the remaining obstacles, leaving a stride out at the last oxer and breaking the beam at 35.97 seconds.

“Kent Farrington and I walked the rollback to have a reference number so I didn’t turn in too tight or too wide,” explained Nusz. “When we walked it, we did an eight, and that’s probably what we should have done, but I thought if I caught a good vertical I could get a seven. When I caught the vertical my eye picked up on the seven, but he kind of backed off the brush, and then I was just wrong. I thought he was going to leave long and he ended up adding. But he left it up and jumped it without a problem. After that jump, I really made sure I was on it. I tried to be smooth in the middle because that was the tricky part, but I trusted him and let him go a little bit at the last couple fences. In the jump-off you have to do whatever you can to get the win.”

Kessler was prepared to answer the challenge Nusz presented when she returned riding Mika. They were right on the pace, but added a stride before the skinny vertical. The pair did leave all the rails intact though, and crossed the finish line at 36.30 seconds, just fractions off of Nusz time to settle for second place.

“I saw the seven in the first roll back, and I could have done it, but I ended up doing the eight after watching Meagan,” noted Kessler. ” Then Mika kicked up a little bit in my leg as I was turning to the skinny oxer, and I ended up doing one more, but for him that was a very fast round. For him to really put the speed on like that and still keep his form was fantastic for him. I’m really happy with him.”

Blythe Marano and Urban, owned by Riverview Farm of Franklin, TN, were the only other horse and rider combination that were able to leave all the fences in place, but they were unable to do so in the time allowed, finishing with one time fault for third. The fastest of the four faulters was Ramiro Quintana of Argentina on St. Bride’s Farm’s Whitney, stopping the clock at 74.46 seconds after lowering the height of the vertical in the middle of the triple combination.

Quitana was followed closely by Canada’s Ian Millar riding Star Power, owned by Team Works of Perth, Ontario. The pair also had an error in the triple combination. Nusz’ trainer Kent Farrington rounded out the top six aboard Zafira, owned by Haity McNerney of Lake Forest, IL, having a rail after the triple combination line before heading home to the gate.

Tonight’s victory marks the biggest win in Nusz’ young career. “I am super excited,” she smiled.  “To only have two clean and go against Reed who is one of the top riders in the world, it was great to go clean and then pull off the win.”

Dynamo and Nusz have been together for three years, and she began riding him in the young jumper classes, before eventually showing in the Amateur-Owner divisions and now the Open Jumpers. “We’ve done everything,” she said. “He’s taught me a lot and I’ve taught him a lot and we have a really good bond. I am an amateur moving up, and it’s nice to have a horse that gives you confidence. He is a jumper and can get you out of sticky situations, but I never go in the ring feeling overwhelmed or over faced because I know that I have him.”

Now, Nusz and her trainer Kent Farrington will aim for Spruce Meadows before traveling to Europe for the summer. “Right now I am focusing 100% on riding. We’re going to Spruce and Europe this summer. It will be my first time in Europe and we will be going to Spain and The Netherlands. I am really looking forward to it. I try to set goals that are achievable, so the World Cup Qualifiers and maybe a Nations Cup in the next two years would be great. This year I want to just start jumping some bigger classes and get the feel for it.”

The Kentucky Spring Horse Shows were the perfect stop for Nusz before heading north. “I love it here; it’s so peaceful and open,” she expressed. “They have classes for everyone from the young jumpers to grand prixs. You can’t pick a better venue. It’s a fun horse show to come to and the management puts a lot of effort into it.”

The jumper action at the Kentucky Horse Park will continue next week with the Kentucky Spring Classic, scheduled for May 15-19, 2013. Highlight events include the $25,000 Hagyard Lexington Classic on Thursday, the $75,000 Mary Rena Murphy Grand Prix sponsored by Audi of Lexington on Saturday, and Sunday’s $20,000 Bluegrass Classic.