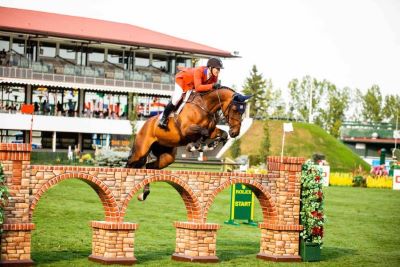 On a breezy and autumnal Calgarian afternoon, 28 horse and rider combinations representing 12 nations contested Friday’s feature class at the CSIO Spruce Meadows ‘Masters’, the 1.55m Tourmaline Oil Cup. Legendary course designer Leopoldo Palacios set the pairings – which included three out of the world’s current top 10-ranked riders – 12 testing obstacles, with the Venezuelan and his team of assistants making full use of the vast and iconic International Ring.

American McLain Ward set the early pace with his 15-year-old bay mare, HH Azur, going clear in a time of 72.51s, within the 75-second time limit. Compatriot Kent Farrington and his 14-year-old gelding, Creedance, looked to be on imperious form, breezing around the course fault-free. In a show of American domination, winner of 2019’s CP ‘International’, presented by Rolex, Beezie Madden and her 15-year-old La Silla-bred Stallion, Breitling LS, also made light work of the 15-fence course. Much to the delight of the crowd, home favourites Tiffany Foster and Erynn Ballard progressed to the shoot-out, both aboard their talented 10-year-olds, Hamilton and Gakhir, respectively. In-form Nayel Nassar from Egypt and his veteran 19-year-old gelding, Coronado, was joined in the jump-off by Brazil’s Eduardo Menezes and his stallion H5 Chagauns and Australia’s Rowan Willis partnered by his grey stallion Ashton Dakota.

First to go in the jump-off was recent Olympic Team silver medallist, McLain Ward, who set a blistering time of 37.38s, which looked hard to beat, after the next seven riders – Rowan Willis, Kent Farrington, Eduardo Menezes, Erynn Ballard, Beezie Madden, and Tiffany Foster – all failed to navigate the eight-fence jump-off without penalties. Last to go, it was apparent that Nayel Nassar was playing it safe, with his sights set on second spot, eventually crossing the line without a fault and finishing runner-up behind deserved winner, Ward.

On his victory and his mare HH Azur’s stunning performance, the two-time Olympic Team gold medallist commented: “I don’t know if I particularly did it better than any of the other riders; she just jumped it better! I actually wasn’t upset by my position in the jump-off. I was just going to ride my plan. I know what her strengths and weaknesses are at this point, and I thought if I put a little bit of pressure on, there might be some mistakes and that played out.

“HH Azur is going to jump the Nations Cup tomorrow for our team, and then Casper, a stallion I’ve been kind of bringing along, who’s a phenomenal jumper and has had a strong summer in Europe, is the horse I’m aiming towards the big Grand Prix on Sunday.”