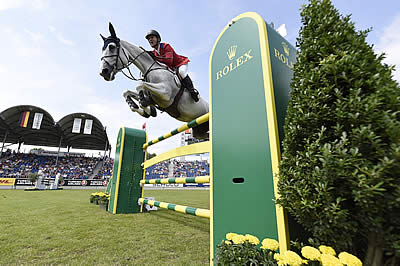 The second Rolex Grand Prix qualifier, the Prize of North Rhine-Westfalia, was won by USA’s McLain Ward in speedy fashion, finishing at the top of the leaderboard in 46.95 secs, shaving nearly two seconds off his closest rival, Kevin Staut, who took second place. McLain paid tribute to his stunning 11-year-old mare, Clinta, following his victory:

Can you tell us about Clinta?

I purchased her in February this year. I actually tried her for the first time right after Aachen last year. She performed really well here, and we were very impressed by her. We started competing together in Florida, in March, and the partnership felt fantastic right from the beginning; she won the first 5* Grand Prix in New York and the 4* in Devon, so we have certainly had a great start together. We are so excited for her career; she is a really spectacular jumper; she is as careful as any horse I have ever ridden and I think we are going to have a bright future.

Who will you be riding in the Rolex Grand Prix?

I will be riding HH Azur in the Rolex Grand Prix. Clinta will ride the big class tomorrow and that will be her last for the week. I am so lucky to have two such amazing horses here; they are both brilliant. They are slightly different in character – Azur has an ease and a blood, an athleticism about her; you can see it in the way she stands. Clinta is a bit quicker, moves a bit faster and her jump is a little more dynamic. The similarity between the two is they have that wonderful quality of giving everything they have to you.

Do you feel extra pressure competing at one of the four Majors that make up the Rolex Grand Slam of Show Jumping?

I have extra pressure on myself as it’s the last big Grand Prix of the world I haven’t won, and I would like to get my name on that wall before I retire. So that’s my drive: I want to win here for sure, so we will do our best, hopefully have some good fortune and we will be in for a chance on Sunday afternoon.