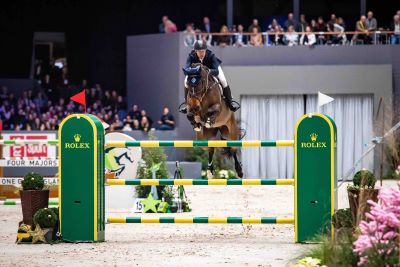 Before the Rolex Grand Prix – the highlight class of the 61st edition of CHI Geneva – got underway, 8,000 adoring fans said farewell to an all-time great horse, Martin Fuchs’ legendary gelding, Clooney 51, who was retired in August 2021. After winning this Rolex Grand Slam Major in 2019 with the now 16-year-old grey, a visibly emotional Fuchs paraded Clooney to each corner of the Geneva Arena, to rapturous applause and cheering from all who looked on, before closing with a short speech honouring his loyal companion.

The scene was then set for this year’s Rolex Grand Prix, in which 40 horse and rider combinations representing 14 nations – including 16 out of the current top 20-ranked riders – lined up, each staking a claim for one of the sport’s most sought-after prizes, as part of their Rolex Grand Slam quests. Course designers Gérard Lachat and Louis Konickx set a technical, 14-obstacle first round test, which would be followed by a nine-effort jump-off, should two or more partnerships navigate the opening round without a fault.

Rolex Grand Slam Live Contender Daniel Deusser set the early jump-off pace and put the pressure on after becoming the first to go double clear in a time of 42.58 seconds. However, it wasn’t to be a second consecutive Major victory for Deusser after Simon Delestre went 0.12 seconds faster, with the Frenchman’s time soon being eclipsed by next generation Belgian talent Gilles Thomas, who went 1.58 seconds quicker still (40.88 seconds). After both Christian Ahlmann and Kevin Staut were unable to go clear, Saturday’s winner of the Credit Suisse Challenge, Shane Sweetnam, looked like a man possessed, going clear and knocking Thomas off top spot in 40.48 seconds, a time that looked unbeatable. However, next into the arena, Martin Fuchs, proved Thomas’ time in fact was beatable, going 39.77 seconds and in turn sending the crowd wild. With penultimate rider Daniel Bluman putting one down, Fuchs’ destiny lay in the hands of American McLain Ward and his 16-year-old bay mare HH Azur. Renowned for their speed and accuracy, the pair glided around the course, going faster than Fuchs at the first two sectors, eventually clearing the final fence over a second quicker than the Swiss, etching their names into Rolex Grand Slam history, with Ward ultimately becoming the Live Contender.

On his first Rolex Grand Slam of Show Jumping Major victory and where it ranks among his career wins, McLain Ward said: “To win the Rolex Grand Prix of Geneva ranks right up amongst the very greatest moments. Olympic gold medals, the Grand Prix in Calgary – this is a very special moment.”

On what makes CHI Geneva such a special place, Ward commented: “Its people! I mean, it’s spectacular — the atmosphere, the environment, the organisers, and sponsors make it so special, that the competitors rise to the day.”