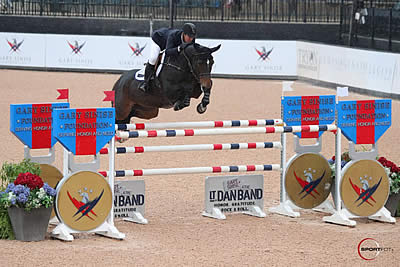 The crown jewel of competitions held at TIEC every fall series, the $384,000 Gary Sinise Foundation Grand Prix CSI 5* was moved from 7pm to 2pm ahead of significant rain in the region, but the competition could not be dampened as 50 of the world’s best challenged the Guilherme Jorge (BRA) track. Twelve pairs qualified for the jump-off test, and following a blazing round from Garza Perez, Ward was last to go piloting the Bob Russell-owned 2009 Oldenburg mare (Quintender x Loves Corinth).

“I knew when I saw Eugenio’s time that it was a tough task. He’s a fast rider, on a very efficient horse that doesn’t waste time. My horse is a bit of a bigger, slower horse, so I knew I was going to need to use my stride,” Ward detailed. “For [fences] one, two, and three, it was a little bit on the extreme edge – a lesser horse probably would have crashed at fence three, but she’s got incredible scope. And then, I just tried to stay to the plan on the rest of the way home.

“I mean, it’s not even a half-inch difference; sometimes you come out on top and sometimes you’re second, and there’s no difference in the rounds, to be frank,” said Ward. “My week’s been a little slow – I had a time fault earlier in the week. It’s been very relaxing here – Tryon has always been very good to me. The horses have been jumping well, but we just haven’t been winning a lot of prizes. So, it was nice to turn that around today on the best day of the week!”

For Garza Perez, the rounds put on the board before him in the jump-off didn’t matter nearly as much as the fact that Ward would ride right behind him, he admitted:

“When you have that guy behind you, you kind of have to go all out! It doesn’t matter what horse he’s on. He could be on foot and he’s probably going to be faster than you! I tried to go as fast as possible and play to the strengths of my horse. [Armani SL Z] was phenomenal today, and I couldn’t have asked more of him,” Garza Perez relayed.

“For sure, I think it was a great decision to move the class forward – none of us want to get wet – and like McLain said, by the end of the class, the footing held up. It was fun to ride, and a tricky course. It’s been a great week here,” he continued. “We always like to come to Tryon these few weeks – the weather is amazing, the horses like it here, and it’s not too far from home – home being Wellington, [FL]. It’s a nice way to finish off the year – this will be the last show for us. It was fun.”

VanderVeen, who’s seen great success at the venue, particularly in CSI 5* competition, noted that her podium finish was a great way to cap a week of strong rides. “I always love spending time in Tryon – we spend a lot of time here. The week has been great: I’ve been very close in a few of the classes now, but not quite hitting, so it was great for everything to all come together tonight.”