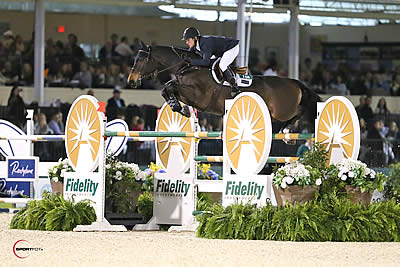 Forty of the world’s best crossed the start timers to Anthony D’Ambrosio’s and Andy Christiansen’s (USA) first-round track with 12 posting perfect rounds to advance to a jump-off. U.S. Olympic team silver medalist Kent Farrington and Gazelle sat in the leading position on a time of 39.51 seconds when Ward entered the ring. To the roar of a home-country crowd, Ward and Noche de Ronda broke the timers double-clear and the ones to beat in 37.47 seconds.

“That’s about all Ronda and I had to give,” said Ward. “I think for any of us, at that level, when you get to go after the one that sets the time, you have a bit of an advantage. Normally, you come out by winning or crashing, one or the other. It all came off very nice and the horse really performed spectacular.”

Equitation competition began Saturday morning at the South Ring with Sterling Malnik of Ocean Ridge, FL riding to the win in the THIS Children’s Medal for riders 14 and Under. Malnik rode her mount, Charlie, to a score of an 84 in the jumping phase and then rose to the top in the test.

Charlie is a fairly new ride for Malnik, who has been working with the horse for three weeks. The pair, trained by Bill Schaub, have only shown in the THIS Medal twice and are already proving to be ones to watch.

Going into the test, Malnik knew that she could count on her 12-year-old gelding. “I was really nervous because I’ve never tested inside the ring before,” Malnik explained. “Thankfully I didn’t have to go first! Charlie is also very experienced and knows what he has to do, so he helped me out.”