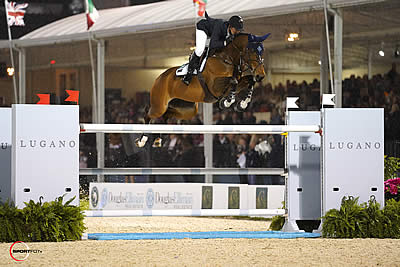 Santiago Varela (ESP), who has been tapped to set the tracks at the 2020 Olympic Games in Tokyo, Japan, was the course designer for the Lugano Diamonds Grand Prix, which welcomed six contenders from three different countries to a tie-breaking jump-off.

Continuing a banner month that included the birth of his second daughter, Madison, Ward is riding a wave of success and a little bit of luck.

“It’s been a pretty incredible few weeks. My team is doing an amazing job,” said Ward, who also won the Fidelity Investments® Grand Prix CSI5* during WEF five riding Noche de Ronda. “I’m lucky to have phenomenal horses and owners, to be able to have multiple horses that can win at this level. If we’re really honest with ourselves, sometimes you can do nothing right, and sometimes you can do nothing wrong. We’re in one of those streaks, and we’re going to enjoy it and try to keep doing our best.”

The Ariat National Adult Medal took place on Saturday in Ring 7 with Claire Stevenson piloting Prem’ Dollar Boy to top honors. The pair received a 77 in the first round. The top four horses returned to the ring for a test, where Stevenson and Prem’ Dollar Boy were able to rise to the top of the class.

Stevenson, of Southampton, NY, and her horse Prem’ Dollar Boy have just begun their equitation career together. The 17-year-old Selle Français gelding (Dollars Boy x De Va Hurie) was originally a grand prix horse and only started competing in the equitation during week three of the 2020 WEF. Stevenson describes Prem’ Dollar Boy as her “forever horse” and also one of the sweetest horses she knows.

“We take care of him ourselves, so whether it’s doing the stall in the morning or night check, he’s like a lap dog,” Stevenson described. “He’s also so fun to ride; regardless of what I’m doing with him, I have a blast. To get to have some success as well is a lot of fun.”