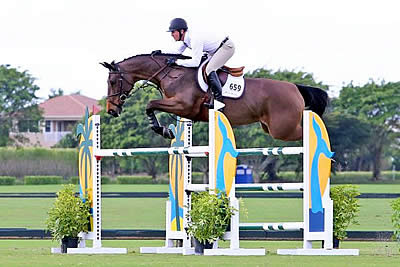 Wellington, FL – February 1, 2014 – Speed was the name of the game today at the International Polo Club Palm Beach as McLain Ward set the time to beat during the Wellington Turf Tour’s 1.40m Grand Prix. Riding Dulien Van De Smeets, owned by Blue Chip Bloodstock, he guided the mare to a double clear effort in 38.802 seconds, leaving 42 contenders to chase his time.

Sarah Segal took an early lead with Zelda as the fog lifted from the field. She guided the mare around the Pierre Jolicouer designed course for a clear first round, then riding to the first of 12 double clear rounds. However, her time of 40.680 seconds would not hold.

“We have brought horses to the Ridge at Wellington nearly every week since they began the series,” Segal said. “It is such a wonderful series, and the field today was definitely bigger. It was a well-designed course that used a lot of single fences, and not so many related distances. It felt much more challenging, and it is much more complicated than the other courses, which is right because we are getting later in the series. It is really a Grand Prix-style course.”

Ward traversed the first round track with ease, riding new mount Dulien Van De Smeets to the top of the leaderboard. The mare is a new mount for Ward, who only began riding her in December. Although she does not have as much experience as some of the other horses on the field, the Ridge at Wellington’s Turf Tour was designed for horses to develop and grow. Ward began the jump-off going easy through the first three obstacles, but he opened her stride through the second half, shaving the seconds while still maintaining accuracy. They tripped the timers in 38.802 seconds.

Ward stated, “The mare is very careful, she doesn’t have a lot of experience going very fast, so she is still learning to look for her jumps. I thought that 1-2-4 was a little bit of a challenge, but at the end of the jump-off, the wide-open gallop really suited her; she could gallop and stay very careful. At the beginning she wasn’t sure, but in the end it was in her box.”

Ward continued, “It is a huge field, and for some of the horses it is a little eye opening because they have been in sandbox rings for several weeks, or at indoor shows. It is a little bit like you are out in space. I think it is very relaxing for the horses. The footing is obviously incredible, and it is a very nice change of venue. There are a lot of very good things about WEF, but there is too much WEF. There are too many shows over the same fences and the same rings. I think there are a lot of good parts to it, but it is just over used. This is great for the horse’s interest level, and for the riders to even have a change of venue, it is a breath of fresh air.”

Young rider Brittni Raflowtiz took her turn at the track with Elios, owned by ESI Show Jumpers, chasing Ward’s time. She was able to guide the bay gelding to a time of 40.366 seconds to slide into the second place. Although her time proved fast, with 21 riders remaining, it would only hold solid enough for the eventual fourth place, just ahead of Segal.

Hector Florentino and Anemone’s Vicky, owned by Stransky’s Mission Farms, gave Ward a run for his money as he blazed around the shortened course. Although he sliced the turns and covered the ground with quick foot speed, their time of 39.156 seconds still fell shy of the top rank. They were awarded the second place for their efforts, while Wednesday’s 1.35m Jumper winner, Ali Wolff and Brianda, rode to the third place finish in 40.135 seconds.

The stakes are increasing each week as top riders, amateur and professional, vie for their invitation to the $24,750 1.40m Invitational Grand Prix Series Finale on Saturday, March 22, 2014, as well as the coveted Leading Rider Bonus. The Wellington Turf Tour will return to the International Polo Club Palm Beach next week for its Wednesday and Friday events.

This approaching week The Wellington Turf Tour will return to Schuyler Riley’s Wolfstone Stables in Southfields. The Wednesday classes will include the Young Jumpers Championship Qualifiers and the two 1.30m-1.35m Jumper divisions. The Grand Prix is set to happen this Saturday, February 8, 2014. The USHJA International and National Hunter Derbies will take place Friday, February 7 at the Ridge at Wellington. The Wednesday and Friday events will run from 8 a.m. to 4:30 p.m. Riders are encouraged to get their entries in as soon as possible for the approaching classes. Turning in entries early will ensure that they get the time that they desire. Show Net will provide the live scoring for the Ridge Winter Tour II, as well as video all rounds. All recorded rounds and results are available at: www.shownet.biz.