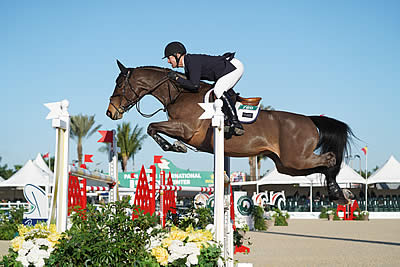 With a second and a half to spare, Ward and the 10-year-old Holsteiner gelding (Catoki x Cartello B) bested a field of 48 over Kelvin Bywater’s (GBR) two-phase course. Their time was enough to win over runner-up Darragh Kenny (IRL) aboard Billy Dorito, owned by Vlock Show Stables LLC, who posted a time of 31.22 seconds.

Ward picked up Wednesday’s top placing while introducing Catoki, a new mount in his string, to FEI competition in North America. The mount was previously campaigned in Poland before carrying U.S. rider Brian Feigus to top national-level placings over the past two years.

Standing at only 15.1 hands high, according to Ward, Catoki is small but mighty. “He’s barely a horse. He’s almost a pony, but fast as lightning and very careful. I think he can be like another [HH] Carlos.”