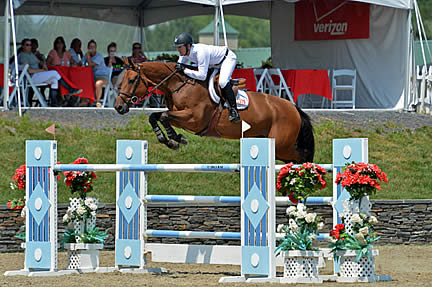 ©ESI Photography. McLain Ward and Love jumping their way to a win in the $50,000 Horze-Equestrian Grand Prix.

SAUGERTIES, NY (July 22, 2013) – Love conquered all this weekend at HITS Saugerties. McLain Ward and his new mount Love beat a star-studded crowd to pick up the top prize in the $50,000 Horze-Equestrian Grand Prix, presented by Zoetis. After only two days in the country, Love – a nine-year-old Selle Francais import from France – arrived at HITS-on-the-Hudson on Wednesday, jumped Thursday and Friday, and won Sunday in the Strongid C 2X Grand Prix Stadium with Ward in irons.

“He had a nice record in France, but he is off to an even more impressive start in the U.S.,” said Ward, who hails from Brewster, New York. “I am most impressed with this horse’s character – he is willing, generous, careful and easy to ride. When he walks in the ring, he doesn’t want to knock the jumps down – he makes my job easy.”

Ward and Love jumped a course designed by Florencio Hernandez of Mexico City, Mexico, which included 13 obstacles and 16 jumping efforts. Three double combinations tested both horse and rider – the first a one-stride pair of verticals, the second was two strides between two oxers and the third a vertical two stride to an oxer. “I have always liked Florencio’s tracks and I thought it was a great course. There were plenty of technical elements and a lot of real distance questions.”

Chapot and Quointreau un Prince set an early Great American Time to Beat as the first go in the jump-off in a time of 46.63 seconds. Her lead went untouched for two rounds until Ward entered the ring and navigated the short course in 43.91 seconds to steal the lead with two left to ride behind him, including Chapot’s second effort.

“I knew Laura was coming and she’s always a fast rider, so I wasn’t 100% confident. I was hoping for a little luck,” said Ward. In his first jump-off round with Wings, Ward left a stride out in the first line and brought down the top rail of the second fence. “It was probably a little fast, so I changed my plan with Love.”

Ward’s change of heart proved the right choice – he and Love galloped the seven strides and left all the rails up with an eventual three seconds to spare, bumping Chapot and Quointreau Un Prince to second. Despite her best efforts, Chapot’s second ride with Umberto ended with a rail in 45.18 seconds.

Third place went to Caristo-Williams and Evening Star, who jumped to a clear round in 47.32 seconds. King and VDL Dogan were also clear win a time of 48.91 seconds for fourth. Iverson capped the top five with Sweetheart. They posted a time of 45.18 seconds, but had a rail at the fourth fence for four faults. Chapot aboard Umberto and Ward in the irons of Wings were sixth and seventh respectively.

The second week of a three-week series begins Wednesday at HITS Saugerties and will boast the $25,000 SmartPak Grand Prix and the $75,000 AIG Grand Prix, both presented by Zoetis. Grand prix riders are now in qualifying crunch time for the Zoetis $1 Million Grand Prix of HITS Championship Weekend and will have six more opportunities to pick up qualifying leverage to appear in September’s big-ticket event. Qualifying standings are available at HitsShows.com.

About Horze-Equestrian
Horze is a global company in rapid growth. They are a Scandinavian, privately owned enterprise that supplies equestrian clothes and equipment for riders and their horses at every level. Their products include a variety of technical and leisure clothing ranges. From young beginners to competitive athletes, they’ve got it covered. Their products are sold today through numerous different channels. Horze stores and retailers have been established in countries across Europe, and they are developing rapidly in the American and Asian markets. Their web-shop is available in 11 languages. The work of their fantastic network of Sales Agents means that Horze is able to provide local and reliable service to retailers; they are proud of the strong relationships they have with large chains and suppliers of equestrian equipment. They make no secret of their intention to become the leading global market supplier of equestrian equipment and clothing. This is not merely an ambition; their sales figures for the past five years show rapid growth in every area of the company. They are driven by a pride and belief in what they do – providing some of the best quality products for the industry’s most affordable prices.