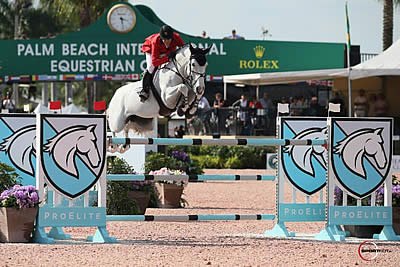 The 2018 WEG team gold medal-winning duo of McLain Ward (USA) and Clinta outpaced a field of 68 entries to take victory in the $36,000 Equinimity WEF Challenge Cup Round 8 CSIO4*.

With the featured Thursday event held as a one round speed class, the time to beat when Ward entered the ring had been set at 74.63 seconds by Switzerland’s Martin Fuchs and his mount, Silver Shine, owned by Willow Grace Farm.

Laura Chapot and Out of Ireland Out Perform 92-Horse Field to Win $25,000 ProElite® 1.45m Jumper Classic

Laura Chapot (USA) and Out of Ireland topped a field of 92 entries to win the $25,000 ProElite® 1.45m Jumper Classic on Thursday in the International Arena.

The large starting field was narrowed down to 11 entries qualified to return to jump off over the Steve Stephens-designed course, and once onto the jump-off, the early time to beat – and the first double clear effort – was turned in by the sixth to return, Kelli Cruciotti (USA), who tripped the timers in 30.76 seconds to move into the lead aboard Grandy de Laubry, owned by 3 Seas, LLC. Cruciotti’s lead would prove to be short-lived however, as Chapot returned next, stopping the clock in 28.81 seconds to ultimately take the win aboard Out of Ireland, owned by The Edge.

More than 40 horse-and-rider combinations competed against each other for the champion and reserve champion ribbons in the FarmVet Performance Hunter 3’3” division during Week 8 of the 2019 Winter Equestrian Festival. Held in the E. R. Mische Grand Hunter Field at the Palm Beach International Equestrian Center on Thursday, Christopher Payne of Cincinnati, OH was awarded the division’s champion ribbon.

Payne was aboard Susan Moriconi’s six-year-old Holsteiner gelding Holden On, (Casall x No Lady) a horse that is fairly new to the Performance Hunter division. Despite a lack of experience, the gelding racked up two firsts, two seconds, and one fifth to catapult to the top of the leaderboard in the competitive division.