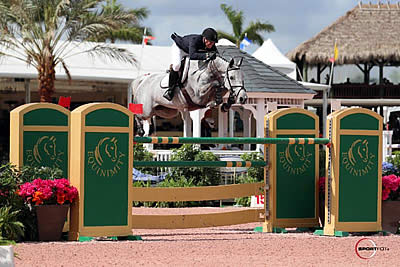 The $35,000 Bainbridge 1.45m Classic had 54 entries contesting the speed track set by course designer Kelvin Bywater of Great Britain. Seventeen of those entries completed the course without fault, but none were faster than Ward, who was fresh off a win in Thursday’s $132,000 WEF Challenge Cup Round 5 aboard his 2017 FEI World Cup Final champion mount HH Azur. This time, Ward tripped the timers in 55.88 seconds riding Bellefleur PS Z, a nine-year-old Zangersheide mare owned by Ward’s godmother, Susan Heller, and Ward’s daughter, Lilly.

In the $35,000 Equiline 1.45m Jumper Classic CSI 2*, Andrew Kocher (USA) was victorious riding Kahlua, owned by Top Line Sporthorse International LLC. They were fastest in an 18-horse jump-off from an original line-up of 83 entries with a time of 30.27 seconds.

Alonso Valdez Prado (PER) and his own Chichester 3 finished second with a time of 30.59 seconds. Third place went to Felipe Amaral (BRA) and Germanico T, owned by Roberta Romalho, who had a time of 31.05 seconds.

Baylee McKeever and her mount, Valor, owned by Lee McKeever, claimed the blue in Friday’s Washington International Horse Show (WIHS) Pony Equitation class. The pair set a high bar to beat in ring 11 as they finished with a high score of 84.