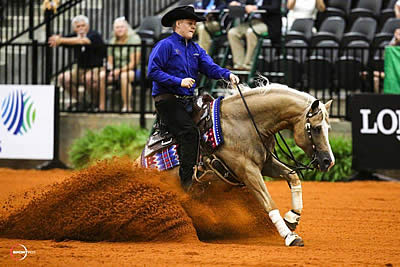 Belgium, meanwhile, completed a hat trick of silver medals, while Germany’s bronze was a Reining first for them at WEG.

For Cade, who was joined in the team by Casey Deary, Daniel L Huss and Jordan Larson, it continued the family’s remarkable connection to WEG success, given that his father won Individual Gold in 2010 and his mother Mandy claimed silver four years ago.

“I was real nervous, but all the guys really helped me and that made a huge difference,” Cade said. “My grandfather owns my horse and he’s trained it as well. He is a pretty good owner to work for.”

And Deary added, “Cade did an amazing job. He showed all that he had and we are all extremely proud of the job he did.”

Reflecting on another second-placed finish, Belgium’s Bernard Fonck said, “I think everybody did everything that they could do with their horses and although it was a strong competition, I think Belgium was also pretty strong.”

With the crowd adding to a memorable atmosphere by getting fully involved in the action, there was also plenty for Germany to celebrate as they completed the podium places.

“This is the fifth WEG I have been a competitor at,” said Grischa Ludwig. “All the other competitions we’ve always been fourth and fifth, we’ve been beaten so many times by a half point and one point and now we’ve beaten the others (Austria) by a half point, which makes this feel even sweeter.”

“I did not think that it takes five FEI World Equestrian Games to get a medal! But, in the end, we really deserve it. This team really deserved it. We’ve been consistent. We had no low score and we were really fighting for the medal.”

Competition for the discipline of Endurance at the FEI World Equestrian Games™ 2018 Tryon was cancelled on Wednesday.

Equestrian sport’s governing body, Fédération Equestre Internationale (FEI), said in a statement that the decision was made “due to a potentially dangerously high combination of heat and humidity, and the conditions out on the trail following heavy rain this afternoon.”

“The decision to cancel, which is in accordance with FEI General Regulations, Article 109.12 was unanimous between the President of the Ground Jury, Technical Delegate and President of the Veterinary Commission, and the Organizing Committee.”

Earlier in the day, the event was reduced from its original 100-mile (160 kilometers) distance to 74 miles (120 kilometers) – and from five course loops to four – after it was announced that some teams had been “unfortunately misdirected” at the 6:30 am EST start.

The competition was stopped at the first Vet Gate inspection and each horse underwent a vet check before the race could restart. No substitution of horses was allowed.

A restart took place 45 minutes after the last horse was inspected and a statement released on behalf of the FEI read: “As there is no possibility to reschedule the ride tomorrow, the President of the Ground Jury, the President of the Veterinary Commission, Foreign Veterinary Delegate and the Organizing Committee agreed that this was the only pragmatic solution.”

The FEI said the cancellation decision “was also in line with the FEI Code of Conduct for the Welfare of the Horse, which states ‘extreme weather – competitions must not take place in extreme weather conditions that may compromise welfare or safety of the horse’.”

President of the Veterinary Commission, Thomas Timmons, said: “This was a difficult decision to make, but it was done with horse and athlete welfare in mind as the conditions this afternoon after the rain resulted in extremely high levels of humidity and combined with rising heat, it was deemed unsafe to continue the ride.”

British scientist Dr. David Marlin, who has been working on heat and humidity studies for the FEI for more than 20 years, provided the Ground Jury with data from the Wet Bulb Globe Temperature (WBGT) index which showed a reading of 31. Anything over 25 is monitored very closely, and the officials agreed unanimously that 31 presented an unacceptable risk to horse welfare for the sport of Endurance.

The decision was backed by Netherlands Chef d’Equipe Pieter Wiersinga, who said: “The race was stopped, and I was asked as the Chef d’Equipe if I was okay with the decision.

“I spoke to my veterinary (team) and asked them what they thought. They said that in terms of it [race] continuing that for horse welfare it might be a problem and then I told them I was okay with that. It was the right decision. For horse welfare, yes, always,” he concluded.

In an update, meanwhile, on events in the morning, the FEI said: “Following this morning’s false start, the FEI has tasked the independent Equestrian Community Integrity Unit (ECIU), which is onsite here at Tryon, to do a full investigation into the circumstances that resulted in some horse/athlete combinations being misdirected.

“The investigation will include interviews with the officials, volunteers, Organizing Committee and all other relevant personnel to provide a full picture of what happened.

“The findings will be presented to the FEI Bureau and the conclusions will then be made.”

Germany Marking the Territory for Team Gold in Helgstrand Dressage

Team Germany is reaching out for the next medal in their collection by building up a strong lead in the Helgstrand Dressage discipline at FEI World Equestrian Games™ Tryon 2018. After two riders out on the first day of competition at Tryon International Equestrian Center, the current champions sit on 76.677%, aiming to complete their medal dozen. Jessica von Bredow-Werndl leads the individual ranking and Dorothee Schneider currently sits in third place with a 75.062%.

Sweden came out as the day’s surprise when veteran Tinne Vilhelmson Silfvén and Juliette Ramel both turned in top performances for ranking their team second on 75.248%. Ramel squeezed in between the favorites on silver position individually, presenting her gelding Buriel K.H. in a much improved way. “Most of that is my trainer’s doing. Patrik Kittel gives me a lot of confidence and he believes in us. That makes me stronger,” Ramel explained.

Adrienne Lyle and Steffen Peters brought the U.S. team to third position. Lyle’s score of 74.581 % has her and stallion Salvino sit fourth individually. “I was really pleased with him, especially considering we warmed up in a downpour and then it’s blazing hot the next second. Fitness is a big factor – he’s a big dark horse and I’ve done my best to get him fit, and I’m glad that I did, because it took every ounce of fitness today,” Lyle beamed.

It was rain and shine at the opening of the Helgstrand Dressage competition, not only because of changing weather. Isabel Cool from Belgium had to retire when her stallion Aranco V quit following her aids, leaving her team without a scratch result.

But, for Australian Alexis Hellyer, day one of the competition already felt like an unexpectedly happy end. The first-timer at WEG had to present her horse Bluefields Floreno for re-inspection only in the morning of the competition and was relieved to find that the stallion was considered fit to compete. “His infection in the foot got better at the last minute. If I am called into the team ever again, I hope it is a little smoother,” she said, placing 23rd in Wednesday’s ranking.

Will the Price Be Right for New Zealand Eventing Couple?

The New Zealand riders have enjoyed a stellar season, with Jonelle claiming her first Badminton Horse Trials title in May before Tim landed the United Kingdom’s other major four-star event – the Burghley Horse Trials – in early September.

“It is obviously a different situation here than Burghley,” Tim Price said. “But it was only a couple of weeks ago of being out there with a bit of pressure, and I will keep reminding myself of Burghley.

“But this is very much a team effort, and it is not going to be about one single individual performance.”

Lining up alongside them, though, are a host of teams and riders with serious gold medal aspirations in both the team and individual competitions.

Defending world champions Germany might be without the genial reigning Olympic champion Michael Jung, but it says everything about their remarkable strength that the team still features current world champion Sandra Auffarth and 2017 European Individual Gold medal winner Ingrid Klimke, who was part of German World Equestrian Games-winning teams in 2006 and 2014.

“I am really happy to be here with my horse,” Klimke said. “We are ready for the next adventure. We have a wonderful venue and I am very proud to be here and be a part of it all.”

Great Britain, world title winners in 1994 and 2010, might have seen a major selection surprise with current world number one Oliver Townend not making their team, but few can doubt claims to a podium finish, given the presence of multiple major championship medalist Tina Cook, world number three Ros Canter and 2011 Olympic Test event winner Piggy French.

Considerable interest, too, will surround a Japanese team led by the highly experienced and reigning Asian Games champion Yoshiaki Oiwa two years out from the Tokyo Olympics.

A total of 83 combinations from 23 countries were presented at Wednesday’s first horse inspection in front of judges Anne-Mette Binder (Denmark), Jane Hamlin (USA) and Andrew Bennie (New Zealand), with all being accepted.

Belgium’s Joris Vanspringel with Imperial van de Holtakkers was held, but then passed on re-inspection, along with the Netherlands’ Merel Blom and Rumour Has It N.O.P, but they also passed after being held.