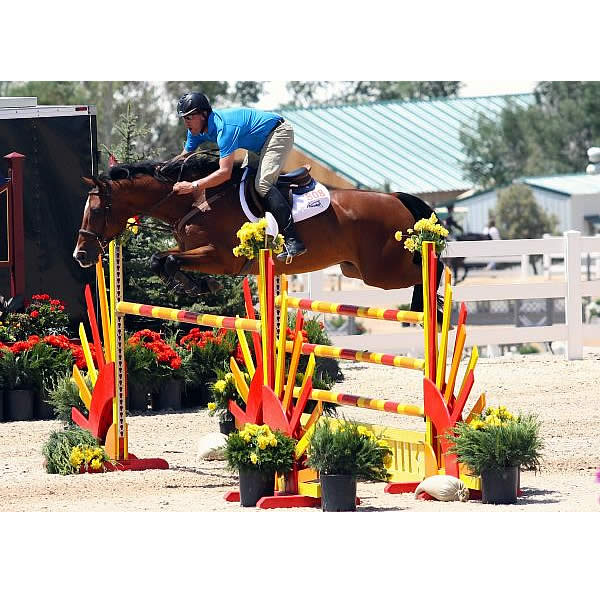 Parker, CO – June 19, 2013 – Summer in the Rockies III kicked off Wednesday with exciting show jumping action in the Kathy and Brad Coors Family Grand Prix Arena. Highlights of the day included the 1.30m and 1.40m Open Jumpers and the Young Jumper Divisions.

McLain Ward has called Alan Wade his favorite course designer in the whole world. And here at the Colorado Horse Park’s Summer in the Rockies III, the jumper competitors got their first taste of the Irish course designer’s work.

In the 1.40m Open Jumper class, Bjorn Ikast and his own enormous splashy chestnut Dutch Warmblood mare, Iz’s Viva La Vida, were the first to go and the first to lay down a clean round. The pair proceeded to a faultless jump-off round with a time of 32.267.

Next, Matt Cyphert from Northlake, TX, piloted Lochivar skillfully and cleanly around Alan Wade’s course. In their jump-off round, Lochivar and Cyphert edged out Ikast, completing the short course with a time of 31.991 without a fault to claim the top spot.

Guy McElvain and his own Coco Colette were third to deliver double clear rounds with a short track time of 34.862, placing them third. Tony Font and Colotta also had a clear first round but retired during the jump-off. Cyphert maintained his position to win the class.

“He’s 9 years old this year; we’ve had him since he was 5,” said Cyphert of Lochivar. “We brought him up through the ranks. He had never really jumped with anybody when we bought him. He has a lot of talent and we’ve taken our time. We started doing the grand prixes with him last year. He was better and better each week. I ended up getting a nice prize in the last one here in June.”

“Then we had to take a chip out of his ankle in September, so he’s had a significant amount of time off,” he said. “We started him back up in March and showed him a little bit in April and May and hoped to get him back into the grand prixes. I think today is a great start.”

“It is really neat to ride on courses built by people of his caliber,” Cyphert said of Alan Wade’s course. “I have actually been coming here for 20 plus years, since the very first one. We haven’t missed a year. We are thrilled about the footing. It has enabled us to come for more weeks than we’ve ever come before and coming from Texas and getting out of the heat; we love being here and hope to be here all summer over the next few years.”

“She’s a little bit feisty; she’s a real chestnut lady,” said Ikast of Iz’s Viva La Vida. “She’s a great horse, just a different ride. I have a philosophy that you have to ride each horse the way they like to be ridden. That’s the way she likes to be – why not follow her? She can really jump.”

“It was a great course today,” continued Ikast. “We have a new course builder. It’s nice to see someone from Europe – I’m from Europe also. I feel at home here! He built a nice attractive course for the first day. It gave us the most important thing in show jumping: confidence. I think he will build them up nicely for Saturday. I think we will see a very good grand prix on Saturday night.”

Seven entries had clear first rounds in the 1.30m Open Jumpers. The first was Tony Font and Sheishof’s Gloria, owned by Ashton Galo Paley. The pair finished the short course with a time of 36.711, setting the time to beat. Next, Amanda McConnell and James McConnell’s Leon D’Or had four faults in the jump-off round. Courtney Frederick and Equestrian Investments LLC’s Soulshine were next to try their skills around the short track, stopping the clock at 36.961, which placed them momentarily in second place.

Next to go were Armando Hassey and Lambert Louis, owned by Cora Leeuwemburg, who performed brilliantly and took over the lead with their clear round of 36.323. Then Chenoa McElvain and Wild Thing 2, owned by Guy McElvain, produced a double clear round with a jump-off timed at 36.600, fast enough to take over second place. Guy McElvain and Carino G, owned by Rancho Corazon LLC, followed but had a rail in the second round.

Last to go, Kristen VanderVeen and Bull Run’s Believer had a blazing fast and fault-free jump-off with an incredible time of 33.127, earning them the win.

“He’s actually Chelsea (Babcock)’s horse and I get the privilege of riding for her sometimes,” said VanderVeen about Believer. “We found him in Europe. He was an approved stallion and he has a lot of 1.50m experience. It’s her move-up horse. When she’s ready she will step into the grand prix. She did her first grand prix on him a few weeks ago.”

“When he goes in that ring he knows it’s show time,” VanderVeen said. “To ride him, he’s lazy, but you get him in that ring and he is fired up. He knows right when that buzzer goes off. Today, he felt great. He’s been jumping really carefully off this footing, even more so than normal, so we could go fast in the jump-off.”

“I quite liked the course,” continued VanderVeen. “It rode really well. The jump-off was fun – you were able to go fast and use turns at the same time. It wasn’t just an all-out gallop or a turn. It was a good mix.”

“We got him for one of my good clients,” said Hassey about Lambert Lewis, who came in second. “He is a great horse. I haven’t ridden him much and we decided to do him in the 1.30m.”

“This is my home town, so I love it here,” he added. “We have great people and a great horse show with intense competition and good footing.”

In the Young Jumpers 6-Year-Old, Tony Font and the beautiful grey Holsteiner, Von Casius, owned by Deana Blackburn, ended up on top.

“He’s coming into his own,” said Font about Von Casius. “Because he’s big and long, he’s kind of hard to get him into shape and get him to do the right things. He’s brave but he’s immature for being 6 years old. He didn’t do so many shows last year. I think he’s going to be a nice horse in another year or so. Jumping is never an issue for him. He can jump big jumps but you have to let them mature at their own rate.”

“I just hope the horses learn and progress,” he continued. “We’re here for four shows. I’d like to come out with a bang on the end, so I don’t want to try to dry up the well too quick.”

“I thought he courses were really fair,” he said. “What you walked is what you got. I thought for the first day, without him knowing the field of horses and riders, he (Alan Wade) did a good job. They rode nice, they were friendly enough and the questions were still hard enough.”