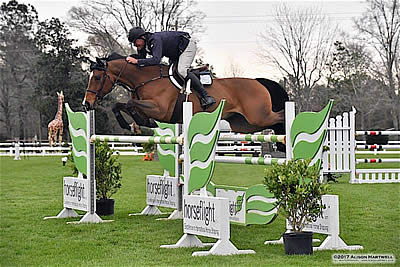 Matt Cyphert of North Lake, Texas arrived at the Gulf Coast Winter Classic Circuit Week II and kicked it off with a trifecta win in Friday’s $8,000 Horseflight Open Welcome and brought home the first, second and third place ribbons.

As the first to turn in double clear rounds on his own Lochinvar, with times of 70.036 seconds and 37.313 seconds, respectively, Cyphert set the new time to beat besting the 47 second round time allowed.

Canebrake and Boyce-Petrey followed Cyphert and Lochinvar with double clear rounds, but their second round time of 44.150 finished them in fourth place overall.

Cyphert followed Boyce-Petrey and Canebrake with Hannah Donald’s Hector with the next set of double clear rounds. Their second round time of 43.054 seconds rewarded them with a third place finish.

Hicks and Al Pacini were the next horse and rider team to turn in a clear first round and although their second round time was the fastest in 35.973 seconds, four jump faults had them finish in fifth place.

Cyphert and Suzanne Suttles’ Better Judgement sat in the last to go position. Going clean in their first round, the pair’s fault free second round time in 39.347 seconds would have them finish in second place overall.

Hicks returned for both sixth and seventh place ribbons in the irons of Helen Gilbert’s Emir D and C’Havinia after turning in four fault first rounds in times of 70.113 seconds and 70.181 seconds, respectively.

Penny Brennan of Buhl, Alabama and her own Sun Tzu earned an eighth place ribbon after turning in a four fault first round in a time of 71.089 seconds.