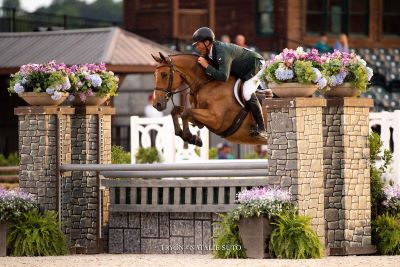 June 10, 20220 – Matt Cyphert (USA) and No Secret De La Pomme came up golden in the $40,000 USHJA International Hunter Derby presented by The Farm House, scoring 382 points over two rounds to be the first to claim an international derby win under the lights in Tryon Stadium. Colin Syquia (PHI) and Front Page, the 2014 Belgian Warmblood gelding (Vigo D’Arsouilles x Cartagena Indias Ecaussinnes) owned by Cynthia Sulzberger, also produced a handy round score of 203 to take reserve on a two-round total of 378 points. Clinching the final podium spot, Kelli Cruciotti-Vanderveen (USA) and Gambler B scored 345 points over two rounds, with the yellow rosette presented to the 2011 Dutch Warmblood gelding (Campbell VDL x Adelwise VDL) owned by Serenity Farm.

Cyphert and the 2013 Belgian Warmblood gelding (RMF Cadeau De Muse x Geneve De Muse) owned by Beth Von Brecht navigated the course set by Skip Bailey (USA) for a score of 179 in the first round, clinching the win despite the fact that “Pom Pom” is brand-new to the discipline, he revealed:

“We’ve had him for about two years now, and we’ve done him in the jumpers with his owner, Beth Von Brecht. I’ve played with him in a couple of Midwest Grand Prixs. But you know, he just has such a good jump and he has the right mind for the Hunters, so we wanted to dabble in it a little bit,” he explained. “About a month ago, we did him in a horse show. He was fantastic: champion in the four-foot division, and good in the derby. I think he’s found a new career!”

Earning the perpetual honor of being the first duo to win an International Hunter Derby under the lights in Tryon Stadium, Cyphert noted that he had to contain his mount’s excitement after the first round and help Pom Pom relax into his new role.

“Since this class normally would have been a Grand Prix, and it would have benefited him to be a little bit awake and alert, we had to sort of work to chill him out, and take a breath. Even after the last jump in the first round, he was so good, and people clapped and he really wanted to get excited about that, but he held it together. I’m just so proud of him. He always tries hard.

“It [riding under the lights] obviously kind of adds to the suspense and the excitement of it all. For us, Derby Finals is on our radar. What a great preparation for a class like that! You had a nice crowd, with legitimate size jumps, and so they really got the same atmosphere that they’re going to have in a couple of months at Derby Finals,” Cyphert shared about the evening class.

Based in Argyle, TX, Cyphert and team make it a point to attend TIEC competition each year, Cyphert emphasized. “We have been coming here for years… I mean, years and years, and we love it. I was kind of laughing with J. P. [Godard] because I’ve won a couple Grands Prix here. I told him how much I liked this ring; it has a little bit of magic for me. Now, in the Hunters as well!”

Cyphert concluded of the venue, “I don’t know what you can’t like about it. I mean, the rings are fantastic, and it’s a well-run show. We love the area, too; there’s just so many things to do between golfing, hiking, restaurants, and more. The customers love it, we love it, J. P. does a great job running it. It’s always on our schedule every year – sometimes different times of the year – but we always make an effort to be here.”