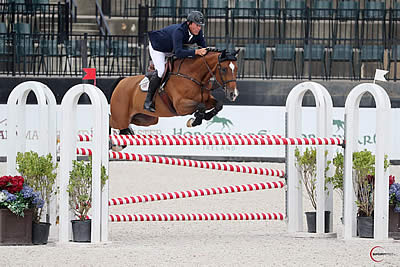 The Peter Grant (CAN) course design saw 34 pairs challenge the first round of competition, with 12 entries returning for the jump-off track. Cyphert and the 2004 gelding (Karamiro x L’espirit) were able to capture a tight time set by Angus by putting in a smooth round, he reported:

“He’s a superstar horse! He’s the best horse I’ve ever ridden, and I’m old enough to know that by now. I’m fortunate with him as he’s really naturally fast. He’s quick across the ground and has a big step. He’s also really good at reading the jumps,” Cyphert added. “He doesn’t spend a lot of time in the air. I felt like if I followed the right track, there were enough places where I could run across the ring and use the speed to my benefit. I tell my clients all of the time that smooth is fast.”

One of 27 entries in the first round and one of ten pairs to qualify for the short course over the Peter Grant (CAN) track, Genn explained that he was aiming for an efficient double-clear, but not necessarily the win with the 2008 Oldenburg gelding (Valentino x Caretano Z) owned in partnership with Patty Genn:

“He’s not a quick horse. He jumps a lot of clean rounds, but he’s not quick. So, for me, I like to start the course as fast as I finish. My goal for today, because I didn’t want to ruin my rideability for Saturday, was to have a nice double-clean, and to be efficient,” Genn detailed. “I wanted to get a good check hopefully if I stayed double-clear, but the goal is to win on Saturday. Winning today was a nice bonus! In the first round, I realized that in the jump-off I could do one less stride from 6A-B to 7. He’s a good turner, so it just came up nicely.”