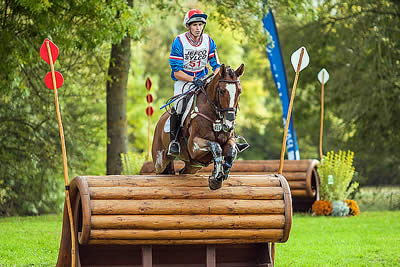 Le Lion d’Angers (FRA), 21 October 2013 – French rider, Thomas Carlile, made history yesterday when clinching both the 6- and 7-Year-Old titles at the FEI World Breeding Eventing Championships for Young Horses on home turf at Mondial du Lion.  This important annual fixture, which brings together many of the most talented and promising young horses in the sport, was abandoned 12 months ago due to severe flooding.  But that only served to ensure even greater enthusiasm this time around as horses, riders, breeders, owners and many spectators gathered once again at l’Isle Briand, Le Lion d’Angers for a spectacular four days of competition from 17 to 20 October.

Carlile’s success was nothing short of extraordinary, as the double had never been done before.  With the six-year-old stallion, Tanareze (Jaguar Mail SF x Uttopie du Maury ANAA) which was representing the French Anglo-Arab Studbook, he established the lead in the Dressage arena and never faltered.  And partnering the seven-year-old Selle Francais gelding Sirocco du Gers (Dorsay SF x Vieusinge du Maury ANAA), he moved up from second to first on cross-country day and again didn’t flinch on the final afternoon.

Making his achievement all the more special was the fact that the 26-year-old rider has made a great comeback after a heavy fall while training last May which left him with head and facial injuries. “I could not ask for more than to win both championships!” Carlile said yesterday. “The crowd carried us, and it feels so good!”

Judges Sue Baxter (GBR), Mercedes Campdera Alatorre (Mex), Eric Lieby (FRA) and Jean-Loup Caplain (FRA) gave Carlile and Tenareze the best Dressage score in the Six-Year-Old category, and the pair would add nothing to their mark of 40.40.  New Zealand’s Jonelle Richards and Cloud Dancer lay second after the first phase having posted 41.30, while The Netherlands’ Larissa Hartkamp and Kain slotted into third on 41.50.

Pierre Michelet’s cross-country track proved influential, with 25 of the 43 starters collecting penalties along the way.  There were eight eliminations, and seven other riders opted to retire, but both Carlile and Richards held their ground with super clears.  Hartkamp and Kain however dropped out of the reckoning with a stop at the first element of fence 19, a narrow brush obstacle, and it was the formidable Michael Jung, and the mare Ricona FST, who moved into third spot in their absence. Jung’s rise to prominence would be short-lived however, as the man who made history on his 30th birthday in July 2012 when becoming the first rider ever to hold the European, World and Olympic championship titles at the same time, was one of three to withdraw his horse before yesterday’s final Jumping test.  So Britain’s Ian Wills and Hartpury Sky is the Limit were lying third as the Jumping action got underway.

And it would bring dramatic change to the scoreboard as only 6 of the 25 starters managed to leave all of the coloured poles in place.  Richards lost her grip on silver when leaving two on the floor while Wills collected a nightmare 29 faults to plummet down the order.  It was Kiwi legend, Andrew Nicholson, who therefore shot up from overnight sixth to clinch silver when clear with the Spanish-bred Jet Set (Nordico HOLST x Carina CDE), while Poland’s Pawel Spisak did likewise, improving from seventh to take the bronze with the Polish-bred Banderas (Moravia WESTF x Babilonia per Jape).

Cool as a Breeze

Carlile stayed cool as a breeze to jump clear for gold.

“Tanareze is a world champion!” said the delighted Frenchman afterwards. “He has matured a lot this week and it allowed me to beat the world’s best! He behaved like a real gentleman. He has made his return to the international scene and he is not ready to leave. I think he has everything to allow me to have a ticket to Rio (2016 Olympic Games)!” the delighted rider added.

“Tanareze is the first horse that I personally bought,” Carlile explained. “He arrived in my stables at the end of his two-year-old year and since the beginning he showed all the qualities required for eventing: beautiful gaits, steady on his feet, a good jumper and a really serious mentality. He is really serene,” the winning rider said.

Silver medallist Nicholson explained that Jet Set was bought last year on the advice of New Zealand Jumping coach, Luis Alvarez Cervera. Nicholson had seen the horse three years ago but considered him “too expensive”.  He explained, “Luis reminded me about him again, and he is one of the best six-year-olds I’ve had until now. This is a real horse for the future. On the cross he had more experience than the others because he’s done a bit this year, but he was a little worried by the crowd in the stands. He’s responsive to commands though, and when it comes to work he focuses.” The New Zealand rider added that he also has his sights set on the Olympic Games at Rio de Janeiro with this horse, and that Jet Set is already improving far more quickly than he expected.

Bronze medallist Pawel Spisak said, “Banderas is a Polish horse that I started early in the season. He has little experience, but he has learned a lot throughout the year. He has a lot of potential.  On the cross I didn’t know what to expect because here it is unusual because of the public and the originality of the obstacles. From the first three jumps he was fantastic.  Banderas has a lot of heart and, even if he’s tired, he gives everything he has,” the Polish rider pointed out.

Carlile’s road to gold in the Seven-Year-Old division was just as impressive.  His Dressage mark of 38.10 with Sirocco du Gers was good enough for second place behind French compatriot Mathieu Lemoine riding the Dutch-bred Bart L (United KWPN x Parisma KWPN) who carried the leading score of 37.80.  Third spot in the first phase went to British star William Fox-Pitt and Henton for Fun.

Ireland’s Aoife Clarke and the Irish Sport Horse Fernhill Adventure (Newmarket Venture HANN x Cloverwood ISH) were lying just outside the medal placings going into cross-country day, and when Fox-Pitt and Henton for Fun had two refusals the talented Irishwoman, who finished individually seventh at the London 2012 Olympic Games, moved up to bronze medal spot going into the final afternoon.  Carlile and Lemoine were also foot-perfect, but 21 of the 56 cross-country starters finished with penalties.  And, once again, the Jumping phase would take its toll.

From a last-day startlist of 42, only three horse-and-rider partnerships managed to keep a clean sheet in the Jumping arena.  Clarke lowered the first element of the penultimate triple combination when third-last to jump and when Carlile followed that with a clear then he really piled the pressure on Lemoine.  Just 0.30 penalty points separated the two French riders, and when Lemoine hit the same element of the triple combination as Clarke, and then followed that by leaving the last also on the floor, he dropped to bronze while Clarke rose to silver and Carlile was assured of the top step of the medal podium.

“I’m so happy with Sirocco,” said the new gold medallist. “He has the mentality of a winner, so sometimes he can get hot when he wants to do too much of a good job. But here, he was perfect and I’m delighted!” said Carlile.

Silver medallist Clarke said, “My head is in the stars with this horse (Fernhill Adventure)! We had a rail down but I’m very happy with the way he jumped today.  He has it all, and our goal now is the European Championships at Blair Castle in 2015!”

Bronze medallist, Lemoine, blamed himself for his two fences down on the final afternoon. “He (Bart L) jumped very well today; he had perfectly recovered from the cross-country test. The two rails were my fault; when I came into the arena I knew I couldn’t afford to make mistakes, but nothing can take anything away from the qualities of Bart!”

The success of Mondial du Lion 2013 was also evident in the attendance, with more than 40,000 spectators visiting Isle Briand over the four days of competition.  And they loved their double-champion, Carlile, who really appreciated their support over a career-defining weekend he is unlikely ever to forget.