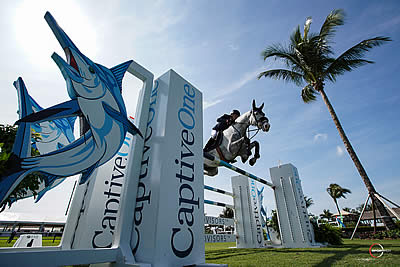 Wellington, FL – January 31, 2020 – The Derby field at Equestrian Village (home to the Adequan® Global Dressage Festival) wrapped up its third day of action in week four with the $73,000 CaptiveOne Advisors 1.50m Classic CSI4*. It was Swiss rider Martin Fuchs – ranked number-one in the world and the 2019 victor of the same class – who commanded both first and second place in the class. He claimed the winner’s rug riding Willow Grace Farm’s eye-catching gray 11-year-old Califax gelding Silver Shine and took second on the 12-year-old Stakkatol gelding Stalando 2, picking up prize-money of more than $38,000 in the process.

Ten of the 40 starters qualified for the jump-off, with four of those also going clear in the second round over Brazilian course designer Anderson Lima’s track on the immaculate palm tree-lined grass Derby field. Fuchs and Silver Shine’s time of 46.74 seconds proved unassailable, while he clocked 47.06 seconds on Stalando.

Fuchs, who is at WEF for the whole season before returning to his base near Zurich in Switzerland, said, “I had a good plan for this week. My grand prix horse Silver Shine only did the first day, then I didn’t do the WEF qualifier yesterday on him, and I did this class today so that he gets two more rounds before the grand prix [on Saturday]. He jumped fantastically in both rounds today, and Stalando did too.”

Ashland Team #2 jumped to the top of the podium in the $25,000 Hermès Under 25 Grand Prix Series Team Event, which took center stage in the Global International Arena at Equestrian Village on Friday evening. The team made up of Helen Graves (USA), Austin Krawitt (CAN), Klas Kudlinski (GER), and Ty Simpson (USA), finished on the only eight-fault score of the night after two rounds of competition.

Kudlinski, 24, posted the only clear performance under the time allowed for his team before the second round was cut short by weather after only two rider rotations competed from the six teams that returned.

“This is the first time that I’m bringing my horses over to America, so it’s the first time that I’m doing the Under 25,” said Kudlinski, who pulled a single rail and picked up a time fault in the first round. “I had one down in the first round, but my horse jumped really, really well. It was obviously a rider mistake. The second round I was more on it, and you’re not riding just for yourself, so you also have the pressure to take care of the other riders on your team. When you miss something, the whole team misses something, but it’s a good experience.”

Jennifer Hannan and Mindful Win the $15,000 USHJA International Hunter Derby for Second Year in a Row

Jennifer Hannan piloted Mindful to the top spot in the $15,000 USHJA International Hunter Derby Hunt & Go, presented by CCTV Agent, out of a field of 61 competitors. The pair scored a total of 360.5 points to win the class for the second consecutive year.

Hannan has been riding Mindful, a 16-year-old Hanoverian gelding by Graf Grannus and owned by Kensel, LLC, for three years. This was the pair’s first week back showing after a ten-month break. “He’s a winner. He goes in every time to win,” Hannan said.

The class was a hunt and go format, with the first eight jumps of the course being the classic round and the last six jumps being the handy round. The course included one trot fence and offered four high options.