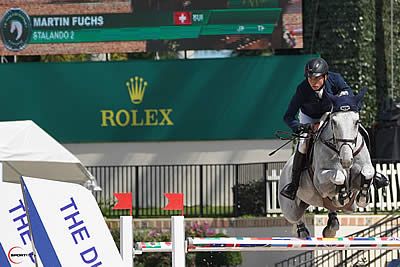 Wellington, FL – February 20, 2020 – Swiss rider Martin Fuchs showed why he is ranked number two in the world with a win aboard Stalando 2 in Thursday’s $137,000 Equinimity WEF Challenge Cup Round 7 CSI5* at the Winter Equestrian Festival (WEF) in Wellington, FL.

Fuchs and Stalando 2 were one of 49 entries to contest Thursday’s featured class, and the duo was one of 13 combinations to jump the first-round track without fault to qualify for Spain’s Santiago Varela-designed short course.

When Fuchs entered the ring as the penultimate rider, the time to beat had been set at 40.75 seconds by Great Britain’s Amanda Derbyshire and Luibanta BH, owned by Gochman Sport Horses LLC.

With his spot in the order on his side and with strides left out throughout the course aboard Stalando 2, Fuchs shot straight to the top of the leaderboard with a double-clear time of 40.69 seconds.

“I watched all the riders before me,” said Fuchs. “I planned to do a stride fewer from one to two, which I did, and then also through the double, I saw Daniel Bluman leave out a stride. I tried to do the same as he did. Everything worked out very well. To the last fence, I pulled once and it scared me a bit that I wouldn’t have the time! I’m very happy with this.”

The Rost Ring began on Thursday morning of week seven with the Pre-Green 3- and 4-Year-Old Hunter division. John French rode Babylon to the championship after winning three blue ribbons in the division.

Babylon arrived in the United States from Europe in December, and French began riding and working with the horse in January. The four-year-old Oldenburg gelding (Crumbie x Die Cera) is owned by Kent Farrington LLC. French, of San Juan Bautista, CA, has shown Babylon three times this year, and the duo has been champion every time.

“He has a great expression and is so careful up front. With all of his flash the judges are just drawn to him,” French commented. “I can just tell that one day he is going to be a famous junior or amateur-owner hunter.”