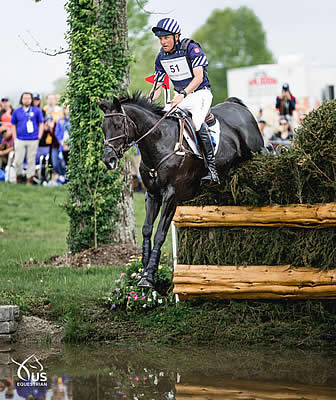 Martin and Tsetserleg (Photo by Alex Banks for US Equestrian)

Lexington, Ky. – In the second phase of the “best weekend all year,” Boyd Martin and Tsetserleg held on to their lead in the Land Rover/USEF CCI5* Eventing National Championship presented by MARS EQUESTRIAN on Saturday. Jumping a highly technical course designed by 2020 Tokyo Olympics course designer Derek di Grazia, Martin (Cochranville, Pa.) and the 12-year-old Trakehner gelding owned by Christine Turner finished within the 11 minute and 20 second time allowed to stay on their dressage score of 27.9. The double-clear cross-country run moved the combination into second place overall in the Land Rover Kentucky Three-Day Event CCI5* presented by MARS EQUESTRIAN (LRK3DE).

“My little guy felt a lot more seasoned this year,” said Martin. “I feel like we are a bit more of a partnership. [Tsetserleg] is a real trier. For a half-bred horse, he has a wonderful gallop, plenty of speed, and he is very, very fit. Throughout the course, he just kept trying, and trying, and trying; he never looked for a way out. … He is a good little horse. He is a gutsy little trier and he had plenty left at the end. I couldn’t be happier with him.”

Fellow American combination Phillip Dutton (West Grove, Pa.) and Z, an 11-year-old Zangersheide gelding owned by Thomas Tierney, Simon Roosevelt, Suzanne Lacy, Ann Jones, and Caroline Moran, also finished on their dressage score of 31.7 with a double-clear ride to firmly place them in second in the Land Rover/USEF CCI5* Eventing National Championship and moving them from seventh to fourth overall in the LRK3DE. Doug Payne (Aiken, S.C.) and Vandiver, a 15-year-old Trakehner gelding owned by the rider, Jessica Payne, and Debi Crowley, were just over the time allowed to finish cross-country on 35.9, sitting third in the national championship and moving from 19th to seventh overall.

Holding onto the lead in the LRK3DE, Great Britain’s Oliver Townend and Cooley Master Class finished their cross-country run with 1.2 time penalties, adding to their dressage score to finish the second phase on 25.3. New Zealand’s Tim Price and Xavier Faer improved upon their fifth-place tie after dressage to move to third with a double-clear cross-country ride and a score of 30.9.

With a crowd of 34,889 watching closely, the 6,452 meter course saw just three combinations successfully complete the tougher option at the famed obstacle 20, the Normandy Bank: Martin, Dutton, and Townend. Martin, Dutton, Price, and American Will Coleman were the only four combinations to complete the course within the time allowed. Living up to the five-star expectations, the cross-country course required long gallops and strategic maneuvers by athletic horse and riders, resulting in 31 combinations completing the phase.

“My guy looks like he has come through [cross-country] alright; [Tsetserleg] is a good, tough horse,” said Martin when asked about his preparation for the jumping in the final phase on Sunday. “[Tsetserleg] is a bit tricky in the show jumping, so I will probably ride him for a bit after the trot-up [Sunday morning] and get him a bit more balanced. … I will do my very best, try to ride him well, and it will be what it will be.”

Tsetserleg served as Martin’s FEI World Equestrian Games™ (WEG) Tryon 2018 mount, and this is his second LRK3DE. The combination finished just outside of the top ten at the 2018 LRK3DE.

Visit the LRK3DE website for updated ride times, schedule of events, and scoring.