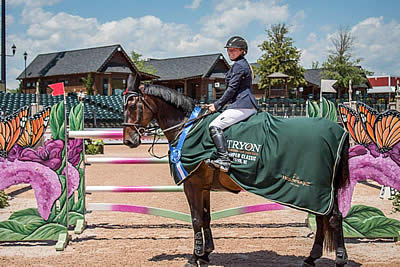 Fifteen pairs tested the Dean Rheinheimer (Sheridan, IN) course, with six returning to challenge the short course. Cincotta explained that the day’s win was only the second time competing at the 1.35m-1.40m level with Granaat, who is a new – and complex – partner in the ring.

“I got Granaat from Allen about four months ago. He’s a tricky horse, because he doesn’t like other horses, so no victory gallops or anything like that. I have to be very careful in the schooling ring, but his jump is amazing. He has all the jump in the word,” she continued. “This is my second class with him at this height – we were seventh in the $25,000 Jumper Classic two weeks ago during Tryon Welcome 4. Before that I had only really jumped him in 1.20m-1.30m.”

Cincotta revealed that Granaat has been “a bit of a project horse” in the few months they’ve been paired so far: “I spent more than a month with him just on the ground. I’ve had to build him up. This [winning] is happening way faster than I ever expected it could. He doesn’t like horses coming at him, or coming from behind, but if you put a ribbon in his tail and it starts flowing and hits him, he bolts. I’ve come off this horse probably fifty times,” she admitted. “You just have to do things a particular way with him – nothing can be fast or rushed, and some days I get on and say, nope, we’re not showing today. Today was a good day for him.”

Originally aimed as a young horse towards the Olympics due to his talent, Cincotta explained that Granaat’s quirkiness has taken creative management and patience, from his gear to the way he wears a red ribbon on his browband instead of in his tail.

“He’s very spooky. And it’s worse if you put earplugs in, or if you try to make him calm or give him any supplements. I’ve tried it all – soundproof bonnets, I’ve tried earplugs.  I think he would be a little tricky to be at the Olympic level, because he can be really inconsistent, but he likes it here,” she relayed. “I literally pulled him out of the field this morning and brought him here – and he doesn’t stay here. He gets to be a normal horse – now he gets to go home. You can’t do that at all shows.

“I was kind of just going calm and collected, and keeping my horse confident,” said Cincotta of her jump-off ride that bested the class by nearly two full seconds. “He’s naturally fast, so I don’t really even have to go fast, and I didn’t go out there for the win, just to keep going confidently. I’m thinking about doing the Platinum Zone competition here in July, and I’ll just keep building him up. The end goal would be to do a Saturday Night Grand Prix eventually, but we’re taking it slow,” she concluded.