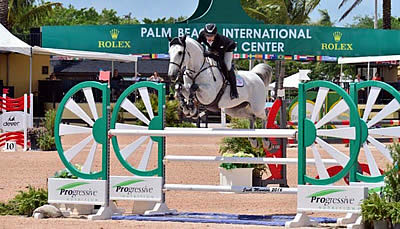 Wellington, FL – April 22, 2016 – Mark Bluman of Medellín, Colombia and the newly acquired Thriller P, owned by Stransky’s Mission Farms, Inc., dashed to victory in the $10,000 Accuhorsemat Open Welcome Stake during ESP Spring III hosted at Palm Beach International Equestrian Center (PBIEC) with a time of 31.001 seconds. Victoria Colvin of Loxahatchee, FL and Don Juan finished in second place, crossing through the timers in 32.153 seconds, while David Blake of Wellington, FL and Park Lane earned third place with a time of 32.272. Competition at ESP Spring III will continue through the week and conclude on Sunday, April 24 with the $30,000 PonyUp Horse Treats Grand Prix.

The course, designed by Catsy Cruz (MEX), saw 54 entries test the opening track, while 18 combinations moved forward to the jump-off round. Only seven pairs earned a double clear effort on the afternoon, while Bluman and Thriller P went later in the class order.

“I showed two horses today and my top horse, Califa, also went in this class. I was trying a new setup with him, just with bitting and equipment, so we used it as a practice round for him. Thriller is a horse that just got out of quarantine last week. We bought him for Liliane’s daughter Daniela to ride,” explained Bluman. “I like to get to know the horses before I put her on them and let her compete, so that we have an idea of where they are. This week was about us getting to know him and see how he goes in the ring.”

Bluman, who had a very successful 2016 winter circuit, is looking forward to helping coach Stransky aboard Thriller P, as the horse has all of the potential in the world to do the larger classes and will be a strong second mount behind her top competition horse HH Donatella. He elaborated, “He’s a bit of a strong horse and very powerful, but I think it will be a great fit for Daniela. The horses that we have in the barn really enjoy her and we just need to see him go a bit more.”

Thriller P, while new to competition in the United States, has an extensive FEI record in Europe, and will be a solid addition to the string of horses at Stransky’s Mission Farms, Inc. Bluman, who was not expecting to ride as fast as he did, was pleased with Thriller P and is excited for his future with Daniela.

“Honestly, it’s a horse that I’m getting to know. I didn’t think I was going quite as fast as I did. He’s quick himself so I just went in there trying to have a nice round and we were lucky but it’s also a great way to end it. He’s very talented and it is always nice to come out at the end of the day with a win.”

For more information on the ESP Spring Series and to see a full list of results, please visit www.pbiec.com.