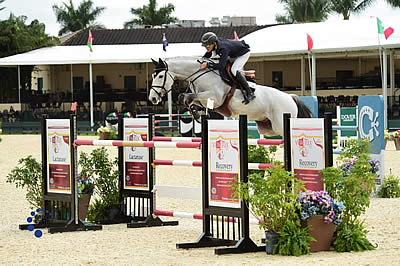 Wellington, FL – December 29, 2019 – The ESP New Year’s competition wrapped up at the main grounds of the Palm Beach International Equestrian Center (PBIEC). Mark Bluman of Colombia and his entry Cartouche won the $25,000 Vita Flex Lactanase National Grand Prix, which was the highlight class of the day, after flying through the jump-off timers in 36.527 seconds. Santiago Lambre of Mexico navigated his Doloris through the short course in 38.086 seconds to claim the second-place finish, while Ryan Genn of Lebanon, OH and Dieta, owned by Shannon Reid, rounded out the podium with a jump-off time of 39.64 seconds.

Twenty-eight entries contested the first round set by course designer Andy Christiansen with only six returning for the jump-off. “I think the course was pretty fair for the amount of people that we had in the class today. We ended up having a good number for the jump-off, and I had the good luck of being the last one to go clear,” Bluman commented. Since Bluman was the last to go clear in the first round he gained the advantage of going last in the jump-off. “Going last in the jump-off is always a big advantage, especially when you have a horse like the one I’m riding. He’s super-fast, turns very tight, and is really careful. Basically, the only thing that I have to worry about is aiming to the jump and to just let him go as fast as he wants. It worked out today.”

Bluman revealed that he and Cartouche have been working together since the summer when his cousin, Daniel Bluman, went to Europe this summer and elected not to take Cartouche overseas. “He’s been making money at every show he goes to. He’s just a winner and it’s a pleasure to ride him.”

As for the upcoming WEF season, Bluman admitted that Cartouche will get a break from back-to-back competition: “I don’t think I’m going to show him much during WEF. I’m going to save him for the summer when I have a better chance of making money. I showed him a lot pre-circuit, and he placed in every Grand Prix he jumped. Today, we finally got the win and it was a good way to close the year. I’m very happy,” Bluman concluded.

Attention Competitors: ESP’s show office records indicate that a large percentage of exhibitors will soon need to renew their Safe Sport eligibility. Please be sure to check your status at usef.org and renew if you are planning to compete at PBIEC in the upcoming weeks.