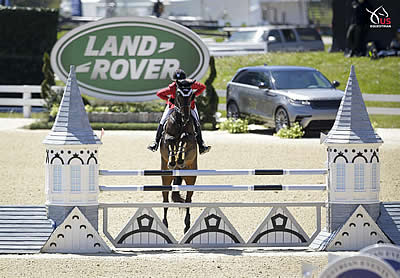 Lexington, Ky. – Marilyn Little and RF Scandalous added another milestone accolade to their resume on Sunday. As the top American combination at the Land Rover® Kentucky Three-Day Event (LRK3DE), they earned the Land Rover/USEF CCI4* Eventing National Championship. A six-time competitor of the event, Little reached the LRK3DE podium for the first time with a score of 32.8. In a shocking twist, Great Britain’s Oliver Townend and Cooley Master Class placed first with a score of 28.7 to strip Germany’s Michael Jung and fischerRocana FST’s chance of earning their fourth straight title.

“It is a really incredible feeling [to win the National Championship] and be next to Oliver Townend and Michael Jung. For ‘Kitty’ to have this performance this weekend, she just astounds me every day. I’m so blessed to have the opportunity to ride her, and it makes it even more special that [owners] Jacqueline Mars and Phoebe and Michael Manders were here,” said a thankful Little. “The people who brought this horse to this level, the hours, the tears, the time – it’s unimaginable to the outside world [of eventing], but we all feel it intensely in the prize giving ceremony, and it’s a very emotional experience. The partnership with [RF Scandalous] is strong, and I’m grateful for everything I have had with her, and I’m looking forward to the future with her.”

As the heavy favorite, Jung took the early lead in the LRK3DE following the first day of dressage on Thursday with a stellar score of 27.1. However, in an interesting turn of events, Little (Frederick, Md.) and RF Scandalous, a 13-year-old Oldenburg mare, put in a personal best dressage performance of 24.8 to steal the lead from Jung.

“She was a little bit excited with the Friday afternoon atmosphere, which we are familiar with at Kentucky. I was excited to go on Friday afternoon and knew she could handle it well. She was very businesslike, and it was a great ride. She was looking to please and she did her job,” said Little, who has focused heavily on improving Kitty’s dressage scores over the past year.

Not only did Little compete in the LRK3DE, she pulled double-duty and jumped in Friday’s inaugural Kentucky Invitational $35,000 Welcome Speed Cup CSI3* before conquering Saturday’s cross-country course. Little rode Derek di Grazia’s track cautiously, which resulted in eight time penalties, finishing 11 seconds over the time. As a result, they dropped to sixth place with a score of 32.8.

“I was thrilled with her; she jumped all the combinations well and gained confidence with every jump. She held her line great and tried hard. She has a long, lopey stride and was looking to go,” said Little.

Sitting in fourth place, Lynn Symansky (Middleburg, Va.) and The Donner Syndicate LLC’s Donner were the top-placed American combination following cross-country heading into Sunday’s show jumping finale with a score of 31.3. Only four jumping faults separated the top five, and Little and RF Scandalous produced a clean round, which put the pressure on Symansky to jump clean. Unfortunately, they dropped one rail, which moved Little to third place following a clean round by Townend and Cooley Master Class and two rails by Australia’s Christopher Burton and Nobilis 18.