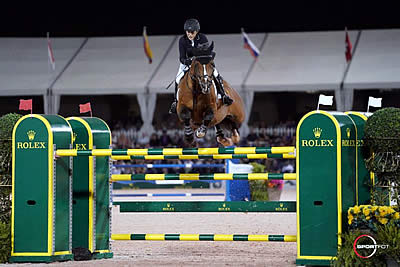 Wellington, FL – March 31, 2018 – In the biggest grand prix of the season, it was Margie Engle of Wellington, FL who was victorious with Gladewinds Farm Inc.’s Royce in the $500,000 Rolex Grand Prix CSI 5* in the final “Saturday Night Lights” event of the 2018 Winter Equestrian Festival (WEF).

Forty top combinations vied for a chance to win the final five-star grand prix and the biggest prize purse of the circuit. Six were able to find the key to a clear round over a track designed by 2016 Rio Olympic Games course designer Guilherme Jorge of Brazil.

The first clear round of the jump-off came from Luis Francisco de Azevedo (BRA) and Comic, owned by Santa Cecilia Stables. They stopped the timers in 42.52 seconds, which held up for second place. Finishing in fourth place was Mexican Olympian Enrique Gonzalez on his own Chacna. They had four faults in 41.47 seconds.

Slotting into third place as the fastest four-faulters were Conor Swail (IRL) and Rose Hill Farm’s Rubens LS La Silla, who stopped the clock in 40.17 seconds.

Engle and Royce were able to speed around the jump-off course to take home their second individual five-star victory in a time of 39.35 seconds.

Katie Jacobs-Robinson and Rocklyn Are Victorious in Hunt Ltd. Amateur-Owner Over 35

Katie Jacobs-Robinson piloted Rocklyn, an entry of Robinson Ridge LLC, to the championship tricolor early on Saturday morning in the Hunt Ltd. Amateur-Owner Over 35 3’6” division. The duo has been together for two years and clinched the win with a blue ribbon under saddle and a first, first, and fifth over fences.