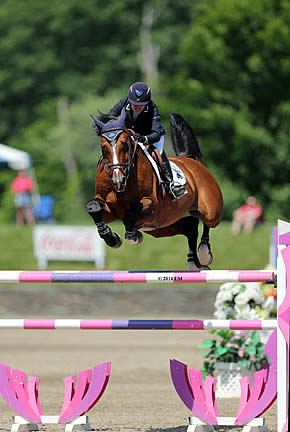 Engle bested 27 contenders to qualify both mounts, resulting in an eight-horse jump-off. She had vastly different expectations for each horse. “Indigo is seasoned but when I go too fast he gets flat. While Royce is just starting to learn how to put on the gas when it’s most needed,” she said.

With Indigo, Engle was precise but visibly conservative before putting Royce to the test. The latter’s turns were all tighter than the track she chose with Indigo, and the clock confirmed their efforts flawless.

Despite Royce’s inexperience, the 10-year old Oldenburg Stallion is proving to be the horse Engle hoped and envisioned he could become, with solid training, from day one. Her face lit up as she reviewed his performance. “We have been working on his rideability a lot the past year… Had I tried for this speed when we started there would have been a lot of drive-by fences out there today,” she said. “He has a big stride, but coiled up over those fences and added perfectly.”

Course Designer Martin Otto, of Muenster, Germany created a track of 13 obstacles and 16 jumping efforts. Many felt the greatest challenges were technical. Variations in striding were wide-spread in several lines during the first round, while the jump-off ideally suited those with a longer reach. Both horse and rider had to think and adapt quickly.

Leann Kelly of Valatie, New York was the first to crack Otto’s course aboard Leander for Honorway Farm, LLC. Next to go, Engle and Indigo guaranteed a jump-off before six more eventually joined them. This included Kevin Babington and Mark Q, Laura Chapot on ISHD Dual Star, Lillie Keenan with Pumped Up Kicks, Julie Wells and Daloubet du Rouet, Engle on Royce and Todd Minikus aboard Aries.

Kelly returned first and set an immediate Great American Time to Beat at 44.53 seconds, but was quickly bumped from the top by Engle who crossed the timers in 41.87 seconds on Indigo.

Four more competitors followed but were unable to take the lead from Engle. Aiming to beat her own time in the second-to-last spot, Engle put Royce’s emerging speed and turning capabilities to good use. “We were so sharp to the last vertical that he was almost parallel to it,” admitted Engle.

Royce, with an unbeatable pace and some breathtaking turns, stopped the clock at 40.33 seconds for the win. Welles piloted Daloubet du Rouet to third with a double clear performance in 42.44 seconds.

Babington guided his own Mark Q to two fault-free rides and finished the jump-off in 42.65 seconds for fourth, while Kelly rounded out the top five.

The sweet surprise after a $30,000 check and blue ribbon for Engle was one ton of Purina horse feed, courtesy of Purina Animal Nutrition. A faithful Purina customer, Engle was ecstatic with the prize. “We already feed Purina, so it’s the perfect end to this day,” she said.

Grand prix action returns to HITS-on-the-Hudson during the summer series which runs July 16 through August 3 as the race to qualify for the Zoetis $1 Million Grand Prix heats up. Keep track of HITS Championship qualifying at HitsShows.com.

The Bayer’s Legend® (hyaluronate sodium) Injectable Solution $250,000 High Junior/Amateur-Owner Jumper Prix is rapidly becoming one of the most sought-after classes of the HITS Championship. After a win in Sunday’s qualifier, successful junior rider Michael Hughes of Allendale, New Jersey, has his sights set on competing in this newest addition to the HITS Championship.

Hughes rode the 10-year-old Dutch Warmblood mare Luxina, owned by Christina Fried, to blue in the $10,000 Junior/Amateur-Owner Jumper High Classic presented by Bayer’s Legend® and continues to climb the Jumper Prix standings. “When I first saw the announcement of the final, I was ecstatic to do it and the million,” joked Hughes.

“This is my final year as a junior and last opportunity to compete in this class, so I’m focusing on it.”

Coming off a rest after competing at Devon, Luxina carried Hughes to a double-clear effort and the clock approved with 40.68 seconds. “She was impressed by this ring and jumps were big, which was great for us,” he said. “She’s smart – when she has to go big and fast, that’s exactly what she does.”

After winning the Week I Jumper High Classic, Mckayla Langmeier of East Granby, CT and her mare Classic Care were still in top form, taking second after Hughes. They were double clear with a time of 41.37, besting the other eight who advanced to the jump-off.

Lisa Deslauriers of New York, New York took third in 41.39 seconds aboard her own Hester.   Fourth was Hannah Patten of Williamstown, Massachusetts and McLain Ward’s Carany, while Erin Haas of Ann Arbor, Michigan capped the top five in the irons of North Face Farm’s Udo DV.