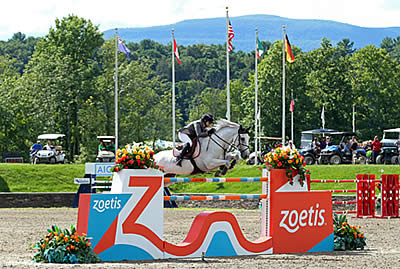 ©ESI Photography. Margie Engle and Indigo jump their way to a win in the $100,000 Strongid C 2X Grand Prix.

SAUGERTIES, NEW YORK (August 4, 2013) – Margie Engle of Wellington, Florida and Indigo, owned by Garber, Griese, Hidden Creek & Gladewinds, share a storied career together, most recently highlighted by a win in Sunday’s $100,000 Strongid C 2X Grand Prix, presented by Zoetis, at HITS Saugerties. The duo topped 35 on their way to the blue, piecing together the puzzle that was Bernardo Cabral’s jump-off track.

“Indigo felt great today,” said Engle of the 12-year-old Dutch gelding.  “We have been resting him while waiting for this class and he felt nice and fresh – maybe a little too fresh in the first round!  But he settled and came back just right for the jump-off.”

Cabral of Lisbon, Portugal set a 13-obstacle course with 16 jumping efforts in the first round, which produced nine clear trips overall. Two combinations appeared late in the track – a triple at fence nine and a double at the final effort – but it was the skinny vertical at fence five that proved the most difficult of the day, and appeared in both rounds. “It proved to be a very careful fence,” said Engle. “We played it very safe coming to that one in the jump-off.”

Christine McCrea of East Windsor, Connecticut spared no time in proving that the original course could be jumped, posting a clear round in the first go aboard Candy Tribble’s Romantovich Take One. Of the 34 that followed, eight more would go clear before the rails moved up in the jump-off. “As with any big-money class, the fences got bigger and it got a bit more difficult to go clean and fast,” commented Engle on the jump-off course. “Indigo handled it super – on any given day he is as good as any horse out there.”

McCrea returned to lead off the shorter track, posting a time of 48.31 seconds with four faults. Todd Minikus of Loxahatchee, Florida followed her with his own Quality Girl. With momentum from Friday’s $25,000 SmartPak Grand Prix win, the pair was on their way to the first clear round before a heartbreak rail came down at the final jump, landing them with four faults and the fastest time of the day – 48.04 seconds. Four rounds followed, each with faults, making a four-fault winner in the jump-off a real possibility.

Engle, however, entered the ring in the seventh spot and posted a clear round, setting the Great American Time to Beat at 52.31 seconds. Two followed her, including Christine McCrea on her second horse. She piloted Candy Tribble’s Wannick WH to a clear effort in 55.85 seconds. Darragh Kenny of Wellington, Florida was last to return with Oakland Ventures, LLC’s Picolo. They chased down Engle and posted a clear round, but were just shy of the win in 53.23 seconds.

“Margie was quick, but I knew my horse was going to be very fast as well,” said Kenny. “I don’t know this horse that well and I feel like I went as quick as we were comfortable with – I wanted to make sure I was clear and I am very happy with this result.”

Lillie Keenan of New York, New York piloted Chansonette Farm, LLC’s Pumped Up Kicks to sixth with four faults in a time of 54.14 seconds. Seventh went to Callan Solem of Glenmore, Pennsylvania on Torlando Group’s VDL Torlando after a four-fault round in 59.49 seconds. Candice King of Wellington, Florida was eighth on Bellissimo, LLC’s Kismet 50 with eight faults in a time of 57.72 seconds. Laura Chapot rounded out the jump-off field in ninth with Quointreau Un Prince, owned by herself and McLain Ward. They finished with 12 faults in a time of 52.77 seconds.

Sunday’s grand prix marked the conclusion of three weeks of summer showing at HITS-on-the-Hudson in Saugerties, New York. Week VII will return August 28 and run through September 1 before HITS Championship Week rolls into town. Highlighting the festivities during the final week of competition will be the coveted return of the Zoetis $1 Million Grand Prix on September 8. Riders will have three more opportunities to secure their spot in the finale with one grand prix upcoming at HITS Culpeper and two during Week VII at HITS Saugerties. Once eligible, the start order for the prestigious event will be determined by a rider’s money won on their leading horse. Keep tabs on all Zoetis Million qualifying action at HitsShows.com.

About Strongid C 2X
Keeping parasite levels under control helps your horse perform at his best. Parasites steal nutrition, energy and good health from your horse. Left unchecked, parasites can cause damage to vital organs, impair growth and performance, and may cause colic. A daily dose of STRONGID C or C 2X helps break the cycle of parasite infection with the power of prevention* and control. The STRONGID C or C 2X result: Your horse is ready to perform.