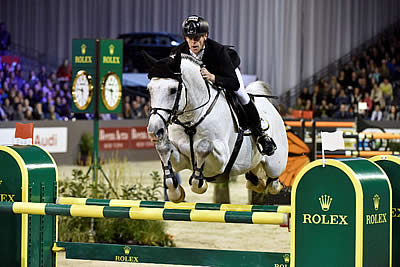 13 March 2016, ‘s-Hertogenbosch, the Netherlands – Marcus Ehning rode Cornado NRW to win the Rolex Grand Prix at Indoor Brabant in the Netherlands, with Hans-Dieter Dreher in second and Willem Greve in third place.

The world’s best riders gave everything to win the CSI5* Rolex Grand Prix with competitors from 13 different nations from as far as Australia, USA and Qatar. The Netherlands were the strongest represented with the home nation fielding 11 riders, followed by Germany with six and Belgium with five world-class combinations.

The Louis Koninckx designed course was a challenging and technical ask for the riders, who had to tackle a 13-fence first course set with a very tight time. From the 40 starters, just 12 went clear and within the time to make it through to the jump-off.

Commenting on his victory, Marcus Ehning said, “I was really pleased with my horse. He was fantastic – it was a great course and great fans as always here.”

It was not to be for 2015 winner Daniel Deusser from Germany, riding Cornet D’Amour, who just tipped one fence down in the second round. The jump-off thrilled the packed crowds who were on the edge of their seats as the final riders battled it out for the Rolex Grand Prix prize.

The passionate home fans had to settle for a third place with Willem Greve finishing less than one second behind the German pair of Ehning and Dreher, with only four riders managing a double-clear.

In ninth position was Rolex Testimonee, and the first and only winner of the Rolex Grand Slam of Show Jumping, Scott Brash, who had one fence down early in the jump-off round.

From 10-13 March the medieval city of ‘s-Hertogenbosch became the focal point for international show jumping as it staged four days of exceptional equestrian sport. Indoor Brabant’s long and distinguished history, combined with its long-term partnership with Rolex – which was extended in 2014 – has strengthened s’Hertogenbosch’s position at the top of the international indoor show jumping circuit.   In this 49th edition of the show, it combined both elite-level show jumping and dressage.

There were several top CSI5* jumping classes over the four days of competition, with the Rolex Grand Prix bringing the show to an exciting climax on Sunday evening.

Rolex Testimonees have taken the honours in the showpiece jumping class at Indoor Brabant on no less than four occasions since 2003. French rider Kevin Staut won the Rolex Grand Prix in 2014; Meredith Michaels-Beerbaum took back-to-back wins in 2005 and 2006; while Brazil’s Rodrigo Pessoa and the legendary Baloubet du Rouet jumped to victory in 2003.

Four of Rolex’s Testimonees were competing in this year’s Grand Prix, including Rolex’s newest Testimonee, Scott Brash; Kevin Staut from France; Irish rider and Rolex’s youngest Testimonee, Bertram Allen; and leading Swiss rider and current Olympic champion, Steve Guerdat. Brash finished in the highest position, after making it to the jump-off but was unlucky in tipping one pole down dropping him down to finish in ninth position.

It was not to be for Guerdat as he rode a perfect clear jumping round, but picked up just one time penalty ruling him out of the jump-off. The Swiss champion will now be looking ahead to CHIO Aachen 2016 having triumphed in the Rolex Grand Prix at CHI Geneva in December 2015. Guerdat, who is currently the live contender for the Rolex Grand Slam of Show Jumping, is hoping to emulate the historic feat achieved by Scott Brash at Spruce Meadows in 2015.

At the 2014 show, Rolex Testimonee Isabell Werth won both the Grand Prix and Freestyle events. Sadly due to a late injury to her prized horse Don Johnson, Werth was forced to withdraw from the competition.

The 2016 edition was won by Hans Peter Minderhoud (NED) who steered Glock’s Flirt to a stylish victory.