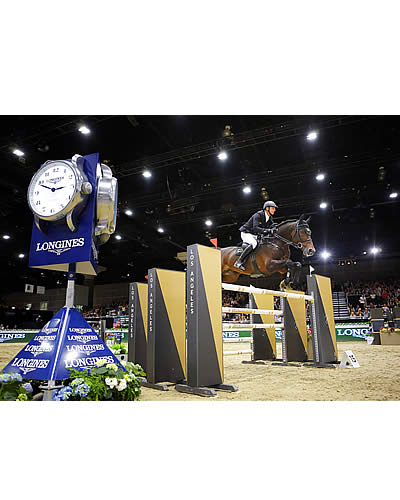 Los Angeles, CA. October 4, 2015 – Four days of champion caliber show jumping action at the Longines Masters of Los Angeles culminated in Sunday afternoon’s Longines Grand Prix. Thirty-six of the world’s best riders competed in the grand finale of the American leg of the Longines Masters series for $450,000 in prize money, the largest purse in any United States indoor competition. Marco Kutscher and Van Gogh stunned the crowd with a jump-off time of 37.04 seconds to become the first ever winner of the new Longines Masters Series Trophy.

Created by renowned Belgian course designer Luc Musette, the 1.60m course was extremely technical and demanding with 13 obstacles. Seven horse and rider couples qualified for the jump-off, including 2012 Olympic individual gold medalist Steve Guerdat and Kavalier, Saturday’s two-class champion Patrice Delaveau on Lacrimoso, and more. John Whitaker and Argento entered the ring with hopes to claim the Masters Grand Slam Super Bonus following their victory in the Longines Grand Prix of Hong Kong, but were unlucky with a rail down.

World Number 1 Scott Brash’s run of dominance on the international stage looked set to continue as he and Hello M’Lady completed the jump-off with a time of 37.93 seconds. The American audience went wild when Kent Farrington and Voyeur came a mere 0.15 seconds from knocking Scott off his throne. Last to enter the ring, Marco Kutscher and Van Gogh had a masterpiece ride to claim top spot on the podium.

“I had a very good start to the jump off; the second part was maybe a little bit slower but anyway I’m super pleased with my horse because for the rest of the weekend nobody realized that I was here. So I took my chance and I’m very pleased, and very happy to go home tonight,” said Kutscher. “Last year I was here, and I think this year, the crowd, the spectators, were even more than last year; the atmosphere is great and it’s fun to ride here. I would like to come back next year to see all you guys.”

“I’m absolutely delighted with the horse,” Brash said, before hurrying off to the airport to fly to China. “I was just annoyed at myself that I didn’t do a smoother round. Marco’s horse was so smooth and it was a joy to watch really if you weren’t sitting where I was. All credit to Marco; he’s done a great round.”

Earlier in the day, Michelle Kerivan and Colin won the Écuries d’Écaussinnes Grand Prix with a time of 40.37 seconds in a five-rider jump-off. Hannah Selleck and Barla were victorious in the Canadian Pacific Grand Prix, winning a three-rider jump-off in 36.38 seconds.