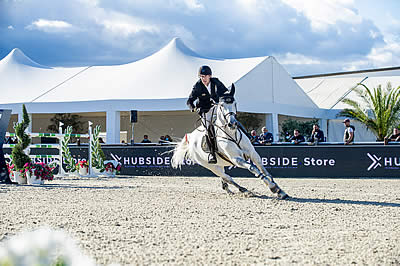 What if the 2020 HUBSIDE JUMPING season ends as it started, with a victory for the Dutch couple Maikel van der Vleuten and Dana Blue? The pair has in any case demonstrated their current form by winning after a jump-off ten, which had a number of formidable competitors. In the final standings, van der Vleuten is ahead of the Briton Scott Brash, another serious candidate for Sunday’s Grand Prix, now associated with Hello Mr President, and the Belgian Olivier Philippaerts, in the saddle on the Blue Diamond V’T Ruytershof. Best French rider, Nicolas Delmotte, finished eighth with Urvoso du Roch.

“It was a great event, with a course perfectly well built by the course manager. I really think the main difficulty was the time allowed: you could hardly get out without taking strides. We all had to take risks, and inevitably, they resulted in some faults. There were ten of us in the jump-off, which is perfect, with among the qualifiers, formidable competitors. Dana Blue is in great shape now; she has shown it well lately. After… Hope for a third victory in the 4* Grand Prix? Why not, but everything will be played out so quickly. My fingers crossed.”