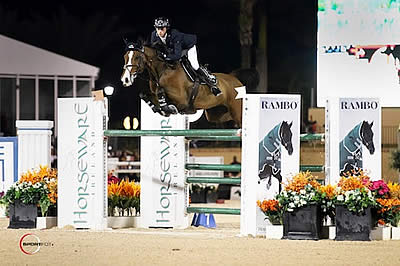 Richard Jeffery (GBR) set the course for 45 competitors in Saturday night’s $125,000 Horseware Ireland Grand Prix CSI 3*, yielding six clear rounds to advance to the jump-off, where all six then completed double clear rounds and raced against the clock for top honors. Continuing the streak of a lifetime, Ben Maher mastered yet another grand prix track, speeding through the course last to go with Urico in the winning time of 41.01 seconds.

“It is unbelievable,” Maher smiled on Saturday night. “I am on a lucky run right now, and Urico felt great. We saved him specifically for this class this week. Luckily, I was pre-qualified, and he just jumped a training round earlier in the week.”

“He was quite fresh tonight under the lights,” Maher noted. “It seemed like a big atmosphere. I thought it was going to be a bit quieter tonight, but it was quite popular. The course was very difficult, probably one of the most technical courses we have had here and it caused a lot of problems all over. It was not a big course, but very technical and it just felt very hard. Then the jump-off was flowing. I saw Daniel go. I had the lucky draw again to watch all of the riders go, and Lauren was very quick. I just did what I could do, and kind of wanted to get to the last fence as fast as possible. I said to Lauren, it looked like it was coming in slow motion, and luckily I was just fast enough.”

Urico’s other two wins this season have each been during the daytime, so Maher had the added challenge of the lights and atmosphere to take into consideration in his preparation for the night class.

“I think all the horses are different under the lights,” Maher pointed out. “If they are experienced enough, I think they come alive and jump sharper and better, and I think good horses rise to the occasion with a great atmosphere. It just seems great fun every Saturday night. It goes well and everyone really seems to be enjoying it here. It is always nice when the crowd gets behind you in the jump-off.”

Speaking of the jump-off, Maher added, “I have no idea where I got the time over Lauren. It was one of those jump-offs where I met every jump where I wanted to meet them. I had quite a tight turn back to the wall. Urico is probably one of the fastest horses we have in the stables. He is incredibly fast before, over and after the jump, so I think he gains time everywhere. I tried not to panic when I saw Lauren go. I just did what I had to do and tried not to make a mistake.”

Maher has put a lot of hard work into forming a solid partnership with Urico since they began competing together last winter and has seen his efforts pay off this year.

“It’s always fantastic to win a class, and especially on Urico,” he stated. “We are still trying new things all the time; we’re testing him, and the other week it was during the day. This was under the lights, so that was nice to get that out of the way and just to get the consistency. He’s a really exciting horse to ride. He wants to be so competitive, he wants to win, and you just have to keep him quiet enough. He had quite a lot of work today because I knew he would be fresh and excited tonight. I am enjoying a great streak for now, and at some point it’s going to change for sure. We lose a lot more than we win in our sport, and at the moment it’s going my way, so I just enjoy great horses, great support from Jane and the team, and make the most of it while it’s happening.”

With a very fast second place finish, Lauren Hough had a great round with her speedy mount Ohlala, and was happy with another top placing this week. She knew she had a good time, but still had a tough competitor to follow.

“You’re never certain you’re the winner, especially when you have Ben following you with the streak he’s been on,” Hough admitted, “but my horse has been fantastic all week. She was second in the ‘WEF’ (Challenge Cup) as well, so we have kind of been knocking on the door, but I was thrilled. I thought Richard did a super job with the course. It suited my horse very well. Perhaps I could have been a bit faster to the last jump, but it was very, very close.”

Deusser was also pleased with his mount, Fyloe v/h Claeyssenhof, explaining that this was the horse’s first outdoor grand prix. “He did a very good job,” the rider acknowledged. “He is a very careful horse. Especially under the lights today he was very impressed with the course. I had to work quite hard in the first round, but the jump-off, that was the best I could do I think. With two experienced combinations behind me, it’s always difficult. You never know quite how fast you have to go, but I am very happy with the round. If I think back, maybe from jump one to two I could have done one stride less, but at the end of the day I am very happy with this. I did a few jump-offs in 1.45m classes and a couple of 1.50ms, but he is not too experienced in jump-offs. It was one of his fastest.”

On behalf of week ten title sponsor and presenting sponsor of the evening’s class, Horseware Ireland founder Tom MacGuinness and his daughter Lorraine were on hand for a fantastic night of competition.

Tom MacGuinness commented on the growth of the competition at the FTI WEF, noting, “I came here probably 15 years ago when it was a grass ring with a mound of sand where people could sit and watch, and then I came back about six years ago and I saw what was going on here, and I said that this was going to be the best horse show in the world. We had been sponsoring Triple Crown blankets for the presentations, but when I came here that time, I just saw the organization. I felt the determination and the focus that they had to make it the best horse show in the world. It is a fantastic show. It is the best show in the world as far as I’m concerned.”

Lorraine MacGuinness explained the incredible contribution that Horseware Ireland has made to this year’s circuit at PBIEC by providing the blankets and coolers that are presented to the winners at not only the FTI WEF, but the Adequan Global Dressage Festival (AGDF) as well.

“We did 1,400 blankets for the whole circuit between the Global Dressage Festival and here, so that’s a pretty big sponsorship for us; it’s a lot of resources,” MacGuinness noted. “The printed blankets like Ben won tonight are new for us, and they are unique. No other circuit does them. We did 55 of them with all of the sponsors’ logos, and we are really proud of how they work.”

Equestrian Sport Productions thanks Horseware Ireland for their fantastic support as week ten of the FTI WEF and AGDF circuits conclude.

Fifteen-year-old Isabella Usenza earned top call with Sebastian in the THIS Children’s Medal 15-17 on Saturday morning at the FTI WEF. Usenza and Sebastian earned an 85.5 in the first round to return third for the test, which called back the top four riders to face off over fences. Usenza ultimately came out on top for her well-executed track aboard Sebastian, a six-year-old Dutch Warmblood gelding she recently purchased from trainer Monty Kelly.

Second place went to Jennifer Hunt, who enjoyed the first round high score of 87 with Winston. Haley Zimmerman and San Paolo finished third after a first round score of 86, and Ashley Denmark was fourth with Vince. The pair earned an 86 in round one.

Usenza has been riding Sebastian for the past eight months and made him her own at the beginning of the FTI WEF circuit. Usenza had watched several videos of the horse go over the years, and after sitting on him once, made the decision to begin competing with him. The pair clicked almost immediately; Usenza praised the gelding for infinitely boosting her confidence level.

“He is so easy for me to ride. I used to have a horse that didn’t get my confidence high. He just takes me around like ‘It’s okay, relax; I’m going to jump.’ He really taught me a lot about how to be more relaxed, and my confidence has gone up a lot,” Usenza explained.

The pair picked up circuit championship honors last fall at HITS Saugerties (NY) as well as a win in the THIS Children’s Medal 15-17 during Week 1 of the FTI WEF. Usenza has been thrilled with their early success and is excited to have her first horse to learn on and eventually move up to 3’6″ divisions with.

Usenza felt her first round course went well but had room for improvement, despite earning well over 80 in a field of over 30 talented young riders. She planned on working on not twisting her body and maintaining a straighter track when she contested the Equitation 15-17 division later in the day.

For the test, the judge asked riders to canter fence one, then halt before continuing at the canter to fence two, which created a bending line to fence three. The final fence was a trot jump in the middle of the ring that aimed riders directly at the judge. Usenza opted to promptly halt after fence one and return to the walk almost immediately after the trot jump to exit the arena.

While one rider attempted to earn extra points by asking for a flying lead change in the bending line, Usenza purposefully stuck with the lead she landed on.

Of her strategy in the bending line, Usenza shared, “I landed on the left lead and counter cantered the line. My trainers always say, every lead you land on in a line that’s only six strides, you just stay on that. You don’t want to risk changing it and missing the change in a line. I’ve been very [well] schooled in my counter canter; I’ve been practicing a lot. So we just stay on whatever lead we land on.”

Usenza trains with Monty and Sandy Kelly, Shaine Brooks, and Amy Momrow of Stepping Stone Farm. She enjoys the fun atmosphere where having a good time is just as important as doing well in the ring. Usenza has travelled back and forth from Albany, NY, to Wellington to have the opportunity to compete with Stepping Stone at the FTI WEF, an endeavor her school has been more than happy to support.

“It’s sort of hard, but they’ve been really good about it. [My school is] really supportive. They’ve given me all my work. They’re really enjoying the fact that I’m pursuing my dream of coming here,” Usenza smiled.

Hunter competition for the tenth week of the FTI WEF, presented by Horseware Ireland, concludes on Sunday with Section B of the Camping World Adult Amateur Hunter 51 & Over division in the Rost Arena at the Main Grounds of PBIEC. For full results, please visit www.showgroundslive.com.