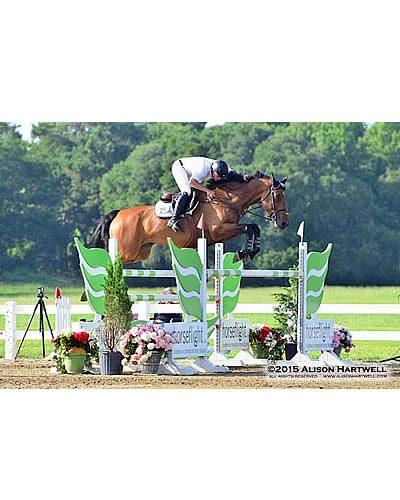 Allen Rheinheimer of Zionsville, Indiana, Technical Coordinator for the 2015 World Cup in Las Vegas, Nevada, designed the course and set the first round time allowed in 90 seconds. Seven returned for the jump off round and Jordan Gilchrist of Flower Mound, Texas was first to go with Anna Beth Athey’s Serena. While the team kept the rails up, their time of 49.677 seconds would incur two jump faults and place them in sixth place overall.

Great Britain’s Gemma Paternoster, presently of Wellington, Florida, followed Gilchrist in the irons of her own and Julie Lee’s Osiris, and turned in a fault-free round, setting the new time to beat at 45.526 seconds.

Maddrix and Contador entered the ring and clearly looked to chase Paternoster’s time. The pair blazed through the course and posted a clear round in a time of 44.112 seconds, taking the lead. “He [Contador] jumped like a meter 60 through the whole course. His body was above the standards,” commented Maddrix. “I think I did a six between the Beau Rivage jump and the triple bar. I don’t think anyone did less than seven. He was fast – great turns, sliced the number three oxer in the jump off really good and just galloped the last jump. He jumped everything easy and was very comfortable,” Maddrix added.

Frankie Owens of San Antonio, Texas followed Maddrix and Contador in the irons of DS Holdings, LLC’s Capricello 2. A rail at the combination in a time of 45.851 seconds would see the pair finish in seventh place overall.

Krisley Hill Equine Investments’ Calligraphy, ridden by Hailey Lubow, turned in a clear jump off round with a time of 45.935 seconds which would place them in third place overall.

Christina Jason of Aiken, South Carolina and Susan Strecker’s Vancouver IV followed Lubow and turned in a clear jump off effort in a time of 47.225 seconds which would place the pair in fifth overall. 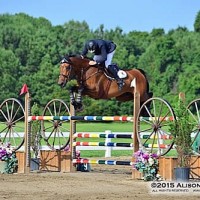 Maddrix was in the enviable last to go position in the irons of Missy Nolan’s Specialized and turned in a clean round in a time of 46.581 seconds. “Specialized is a work in progress,” commented Maddrix. “That was the first time he [Specialized] went double clear in a grand prix,” he continued. “He was awesome. Knowing that I already won the class, I didn’t want to run him off his feet and I just kind of stayed out there. I would rather be double clear than get four faults and end in seventh,” he added. “The triple bar to that combination in the first round, I got out there in 3/12 on him – I don’t know how he did that, kind of contorted his body. In the jump off round, after the triple bar, he landed, sat back on his haunches and jumped back and it was probably the best jump in the course. He knew he made a mistake the first round and came back and fixed it. He’s thinking about jumping clear,” added Maddrix. Specialized and Maddrix finished fourth overall.

Contador and Maddrix won the class followed by Paternoster and Osiris.

“That was Contador’s first grand prix win and I am really happy with how he jumped,” commented Maddrix.

“We had a great week here and besides winning the prix and the derby, Mary Elise Nolan was also second and fourth in the Junior Hunters,” he said with a smile.