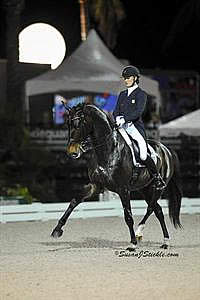 Wellington, Fla. – The Wellington Nations Cup CDIO3* sponsored by Stillpoint Farm, held in conjunction with the Adequan Global Dressage Festival, came to a conclusion on  Friday evening in front of a packed house with riders vying for Individual medals in Freestyle competition. Small Tour and Big Tour combinations went head-to-head, with the Ground Jury of Anne Gribbons, Gabriel Armando, Cesar Torrente, Lorraine MacDonald, and Bo Jena judging all competitors to determine Individual honors. The U.S. had strong representation in the Grand Prix with four of the six entries flying the American flag, while in the Small Tour two up-and-coming combinations represented the United States.

For the third consecutive day Adrienne Lyle and Wizard could not be beaten as they posted a score of 75.8% in the Grand Prix Freestyle to earn the Gold medal. The competition for the top spots on Friday were incredibly close with the top three all finishing within one point of each other. Lyle’s teammate from the winning USA I Nations Cup team, Tina Konyot, joined her on the podium, finishing in third place. Splitting the American podium finishes was Juan Matute Jr. of Spain with Don Diego Ymas in the Intermediaire I Freestyle Test on a score of 75.325%.

Lyle (Ketchum, Idaho) and Peggy Thomas’ 15-year-old Oldenburg gelding had the crowd’s full attention throughout their performance set to some of the most popular music from the 1970s. Throughout the test, Wizard’s ground covering and expressive gaits were on display and the maturity the impressive gelding has developed over the past 12 months shown through as he remained rideable during the entirety of the test.

The pair showed brilliant work on Friday night, particularly in their rhythmic piaffe and, passage as well as introducing added difficulty by completing double pirouettes. The pair looked on track to score in the high 70s until a bobble in the one-time changes and stumble during their final extended trot.

“I was thrilled with my Freestyle; he can be a bit spicy, especially in the Freestyle,” said Lyle. “I think he was the most rideable he’s ever been in a Freestyle (tonight).”

Lyle always enjoys riding her Freestyle and believes Wizard rises to the occasion as the crowd gets involved with the music.

“I really like my music. Everyone gets into it and is whooping and hollering and he feeds on it, so do. It’s really fun.”

Finishing in third place on 75.2%, Konyot (Palm City, Fla.) and her own 16-year-old Danish Warmblood stallion proved why they have been among the top U.S. Grand Prix combinations for the last four years with another solid performance on Friday night. Riding to their trademark music which includes KT Tunstall’s “Black Horse and the Cherry Tree” and Beyonce’s “Crazy in Love” they added levels of difficulty throughout the test as they executed one time changes on a half circle as well extended canter into piaffe and piaffe pirouettes.

“I think this is the first time I have been thrilled to be third, I usually like to win but I’m very excited to be third tonight, this was so exciting,” said Konyot. “To see all these people here to watch dressage was incredible.”

Shelly Francis (Loxahatchee, Fla.) and Patricia Stempl’s Doktor produced a solid effort on Friday night in the FEI Grand Prix Freestyle to score 73.4% and finish in fourth place. The 11-year-old Oldenburg gelding has continued to improve in his second year at the Grand Prix level and in their test set to an upbeat soundtrack showed immense potential for the future.

Leading off the Grand Prix Freestyle on Friday was Catherine Haddad-Staller (Califon, N.J.) and her own Mane Stream Hotmail. The 12-year-old Oldenburg gelding demonstrated solid piaffe and passage to score 69.8% and finish in eighth place for their up-tempo test.

Silva Martin (Unionville, Pa.) closed out her debut U.S. Nations Cup performance with a ninth place finish in Friday’s Freestyle, riding the Rosa Cha W Syndicate’s Rosa Cha W to a score of 69.325% in the Intermediaire I Freestyle. The 10-year-old Warmblood mare showcased athletic trot work, with Martin increasing the technicality of the canter work to include flying changes on a circle, two-time changes, and solid pirouettes. Martin and Rosa Cha were awarded a 69.325% for their test that was set to current Top-40 hits.

Shawna Harding (Aiken, S.C.) led-off the U.S. effort on Friday evening performing an up-tempo Intermediaire I Freestyle with Tonya Rowe’s Rigo. The pair executed a near flawless test to a compellation of hits from the 1970s which featured an enhanced level of difficulty including the 13-year-old Hanoverian gelding performing two-time changes on the centerline. They finished the Freestyle in 11th place with a score of 68.7%.