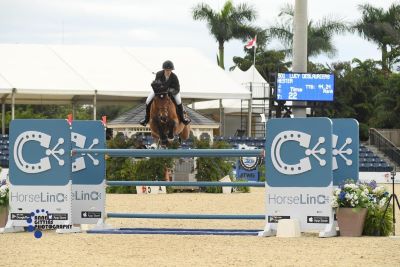 “It feels great to be back!” commented Deslauriers on competing at PBIEC. “Obviously, it’s an interesting time for everyone. I had a little bit of a break at school. I was at school the past two months and came down two weeks ago, so I’m still trying to get back into the swing of things. Because of the strong people behind me that kept my horses going, it made this transition back into the grind of showing so much easier. It feels good. We’re lucky to be able to show and to get back into what we love doing while so many people are unable to do so. It’s definitely a fortunate situation we’re in.”

Course designer Héctor Loyola (PUR) created a track of 14 efforts for international competitors in the first round of the $73,000 Sweet Oak Farm 1.50m Qualifier CSI4*. Out of the initial starting list of 66 pairs, 16 duos advanced to the jump-off. The group of returners represented six nations, including the United States, Ireland, Israel, Great Britain, Switzerland, and the Dominican Republic.

As the second to go over the short course, Laura Kraut (USA) and Goldwin, owned by Stars and Stripes, set the standard with a clear ride in 45.72 seconds. Their lead held for six trips until Daniel Bluman (ISR) entered the ring aboard Gerardo Pasquel’s Alamo, the 2019 FEI Jumping World Cup Finals champion who was previously campaigned by Steve Guerdat (SUI) before Bluman took over the ride in the summer of 2020. On Friday, the pair put in a double-clear effort in a time of 44.24 to take over the top spot with only a handful of challengers remaining.

“On the turn back to the second to the last jump I took a big risk, but it was going to go one of two ways, and my horse was really right there with me,” reflected Deslauriers of her winning jump-off. “He saw it too, so luckily it went our way today. I’m really thrilled with my horse, and I have such a great team of people behind me that makes today and last week’s CSI4* win possible.”

Just a few trips later, the winning partnership of Deslauriers and Hester took their turn around the pattern, tripping the timers in 43.94 seconds, a time that would retain the head spot on the leaderboard. Bluman and Alamo (Ukato x Equador) maintained second position, and Kraut and Goldwin (Emerald x Understone van de Kapel) rounded out the top three.

“After this Sunday, my horses will have at least a month off to recoup a little bit and rest up,” noted Deslauriers on her upcoming plans. “I think we’ll have a lot of top people here, as there are only so many options available at the high-level right now in the world. I think it’ll be a long season to come, and it’ll be a good break for everyone to try and stick to what’s been working and stay focused on our goals.”

The $10,000 Bainbridge 1.40m Open Stake was the final class of the day in the International Arena and hosted a large pack of 67 horse-and-rider combinations. Just like the earlier FEI class, 16 pairs turned in clear performances to advance to the jump-off, which concluded with six duos going double-clear. As the fastest by more than two full seconds, Shane Sweetnam (IRL) and Sweet Oak Farm’s Byzance Mail claimed victory in a time of 43.16 seconds. The next quickest, Molly Ashe Cawley (USA), navigated Louisburg Farm’s Berdien to second place after crossing the timers in 45.57 seconds, and Erynn Ballard (CAN) added another country into the mix to make for a diverse podium with her third-place ride on Ilan Ferder’s Kamilla D in 48.16 seconds.