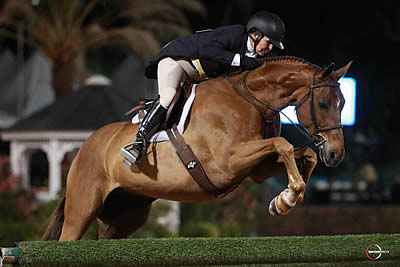 After leading in the first round with a score of 89.50, Serio and Rock Harbor, an 11-year-old Warmblood gelding, returned as the final pair in the handy round. They scored 86.75 for a 176.25 total to win the class.

After winning this class the past two years, Scott Stewart of Wellington, FL and Catch Me, a ten-year-old Holsteiner gelding owned by Gochman Sport Horse LLC, had to overcome one mistake in the first round and a score of 83.33 to complete their three-peat. They made an amazing move up the standings from 11th to second place with the best second round score of 91 for a total of 174.33.

In her first time competing at WEF, Tracy Fenney traveled from Flower Mound, TX to finish in the top three of the Hunter Spectacular. She and MTM Outbid, an eight-year-old Warmblood gelding owned by MTM Farm, had an 85.33 in the first round and sat seventh. A solid handy round score of 88.83 moved them up the standings to third with a 174.16 total.

John Ingram continued his winning streak aboard Airport 48, owned by John and Stephanie Ingram, LLC, well into WCHR week six at the Winter Equestrian Festival. Ingram and the 15-year-old Holsteiner gelding were crowned champion of the Hunt Ltd. Amateur-Owner Hunter Over 35 division on Saturday, after claiming two firsts and a second over fences and a fourth in the under saddle.

Emma Kurtz entered the International Arena on Saturday afternoon to claim her championship ribbon in the Bruno Delgrange Large Junior Hunter 16-17 division. Unfortunately, her mount, Dedication, owned by Dr. Betsee Parker, was unable to accompany the young rider in the big ring for Saturday’s competition, as he was not feeling his best the night before. However, the pair still bested the division by claiming both blue ribbons over fences and a fourth place in the under saddle on Friday.

Saturday’s daytime hunter competition came to a close with Emma Kurtz aboard A Million Reasons, owned by Dr. Betsee Parker, being crowned the Small Junior Hunter 16-17 division champion in the International Arena. The duo took two first place ribbons over fences and a first under saddle.

The Lugano Diamonds Amateur-Owner Hunter 18-35 division ended in a California split on Saturday with champion ribbons going to Kelly Tropin riding Chablis, owned Libertas Farm, and Callie Seaman aboard her own Chicago.

After coming back from a spinal fusion surgery in July, Seaman started riding again in early January and has been showing for three weeks. She hails from Greenwich, CT and piloted Chicago to two seconds and a fourth over fences as well as a win under saddle.

Iwasaki and the 15-year-old Selle Francais gelding by Elf d’Or were first, second, and third over fences as well as sixth under saddle.

Fourteen-year-old Natalie Jayne of Elgin, OH collected two firsts and a third-place ribbon over fences as well as fifth under saddle to win the Small Junior Hunter 15 & Under Championship riding Cracker Jack, her own 11-year-old Warmblood gelding.

A brand new partnership triumphed in a field of 27 starters in the $35,000 Hollow Creek Farm 1.50m Classic during week six. On the Derby field at Equestrian Village (home to the Adequan® Global Dressage Festival), Brazil’s Francisco Jose Mesquita Musa and Biscayo produced the fastest of only two clears in the three-strong jump-off.

The 12-year-old horse is only lightly competed, though under his previous rider, Bolivia’s Reynaldo Roberto Daza Cardozo, he contested the Bolivarian Games in 2017. Biscayo’s Wellington victory was his first ever international win.