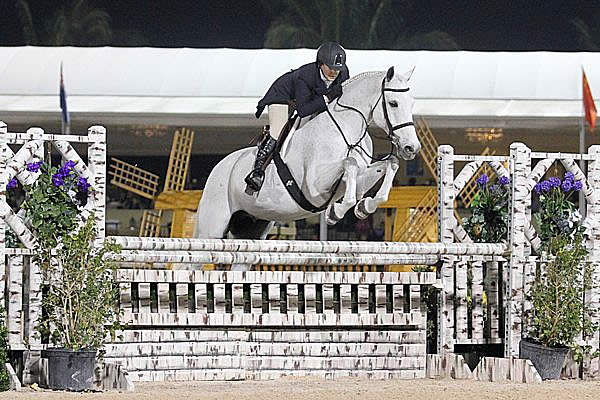 Wellington, FL – April 10, 2013 – Throughout the twelve weeks of competition at the Winter Equestrian Festival, Louise Serio and her horses and riders have been extremely successful in the show ring. Serio and her riders have earned multiple championship honors, including the Performance 3’6″ Working Hunter Reserve Circuit Championship with Bryan Baldwin’s Castle Rock.

Serio showed Castle Rock captured the division’s championship honors during Weeks Two and Week Seven, as well as the reserve championship during Week Six. During Week Seven, the pair competed in the $50,000 USHJA World Championship Hunter Rider (WCHR) Peter Wetherill Palm Beach Hunter Spectacular, where they took home the third place honors after receiving a score of 91.5 during the first round.

“I think it’s really amazing how important it is as a rider to get into that class,” noted Serio. “You see everybody gearing up and working for it and trying to get in it. It’s really fun to see that and I think it’s really great to see the class go so well. Castle Rock is just a wonderful horse and he just gives you confidence and always tries so hard.”

Serio also competed with Samba, owned by Marigot Bay Farm, in the Performance 3’6″ Working Hunters. They earned the championship honors during Week Nine, and placed third in the year’s circuit standings.

Continuing to have success in the professional divisions, Serio competed with Annette Lauer’s Bonaparte in the First Year Green Conformation Hunters, where they were awarded the championship ribbon during Week Six. Serio and Carento, rose to the top of the class during Weeks Eight and Eleven. Ashley Hotz, a student of Serio’s, attained various ribbons in the division upon her mount Entourage. Louise Serio finished off her championship earnings on Namesake in the Pre-Green 3-4 Year Olds during week Nine.

The Amateur-Owner riders of Derbydown had some success of their own in the show ring. Bridget Hallman and Casino claimed the championship in the Amateur-Owner 35 & Over Hunters during the opening week of the Winter Equestrian Festival and continued to attain another top tricolor during WEF 10 aboard Constellation. Hallman also earned ribbons in the division throughout the season on Do Tell as well. Clementina Brown also had success in the Amateur-Owner Hunters, riding Isis and Dashing to top awards throughout the season.

Hallman continued her success, topping the Adult Amateur 36-50 Hunters during Week 10 with Lulu. She also rode to top ribbons in the Amateur Owner 36 & Over 3’3″ Hunters, claiming various ribbons on Hearsay. Cindy Firestone had a spectacular end to the season, attaining the reserve championship during Week 12 on Khrome.

In the Amateur-Owner 18-35 Hunters, Lindsay Mutschler was a name to look out for, as she and her mount Fielding, were the reserve champions during Week Nine and climbed to the top during Week 12, where they also finished in the Top 10 during the $50,000 USHJA International Hunter Derby.

Christina Serio had success in the jumper ring as well, showcasing the talents of World Lady and Discovery O.

Other horse and rider partnerships that earned ribbons throughout the circuit included Emma Kurtz and Jennifer Burger’s Aate in the Children’s 14 & Under Hunters, and Alanis Smith and One Love in the Low Children’s 2’6″ Hunters.

Owned and operated by top hunter trainer Louise Serio, Derbydown is nationally recognized as one of the foremost show hunter barns in the country. It is a training, boarding, showing and sales business with a multi-level horse facility providing all levels of instruction to A-quality showing in Kennett Square, PA. Serio began training at Derbydown in 1975 and she consistently trains and rides champions in every division at the most prestigious shows on the East Coast. Some of her championship mounts include Red Panda, Gray Slipper, Phillipa, Rock Star, Aate, Castle Rock, Marshall, Willow, Casino, Constellation, and Do Tell. Most recently, Serio was victorious in the 2011 WCHR Pro Hunter Spectacular aboard Castle Rock at the Winter Equestrian Festival. For more information, please visit www.Derbydown.com.